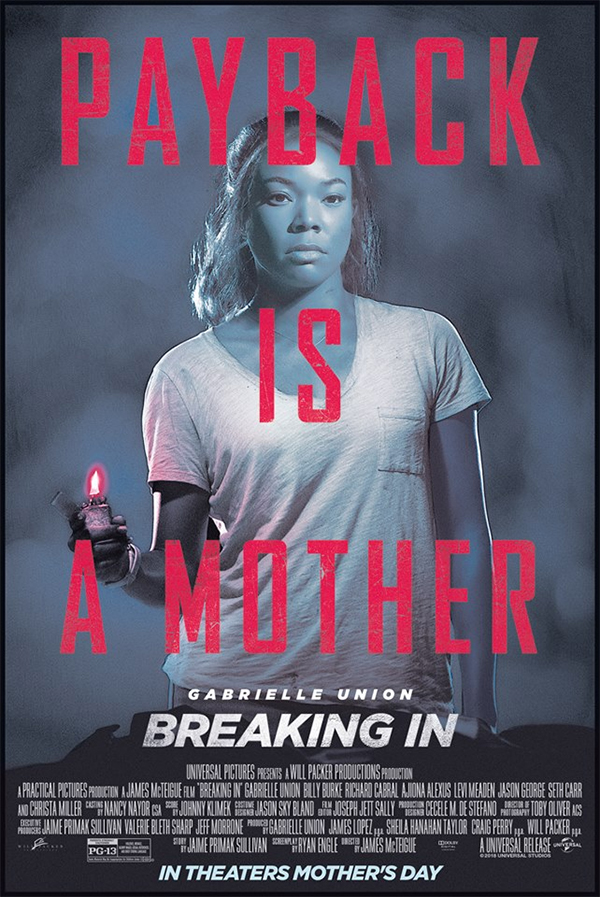 If you have seen the trailers for the new home-invasion thriller “Breaking In”, then you already know the whole movie. This shouldn’t come as much of a surprise to anyone as films of this nature are usually saddled with a paint-by-numbers screenplay. Writer Ryan Engle who previously gave us the Liam Neeson thrillers, “Non-Stop” and “The Commuter”, knows all about generic storytelling. Director James McTeigue (“V for Vendetta”) showed promise at one point in his career, only to deliver one flop after another. His latest, “Breaking In” has what it takes to be a box office hit, but I doubt those who go see it will be remembering it soon after.

After the death of her estranged father, Shaun Russell (Gabrielle Union) brings her children, Jasmine (Ajiona Alexus) and Glover (Seth Carr) to his massive estate in the middle of nowhere so that she can have his home put up for sale. Soon after they arrive, the family realize that their elder was quite paranoid. Not only are their camera in every room as well as every corner of the home, but the windows are bullet proof. The place is a fortress.  It turns out that there was he had good reason for the excessive protection. Shaun’s father was a criminal, and he had a safe filled with millions of dollars in cash. Criminals attract more criminals and that brings us to the home invaders.  Eddie (Billy Burke), Duncan (Richard Cabral), Sam (Levi Meaden) and Peter (Mark Furze) want the money and they will stop at nothing to get it.

“Breaking In” is nothing more than a series of predictable events that isn’t even entertaining on the most basic level. Burke is an absolute bore as the leader of the crew, with only Cabral bringing some psychotic entertainment to the screen.  There are also scenes that made me shake my head in disbelief. When one of the characters gets their throat slashed, there seems to be no blood on them when the body is dragged into the house.  The slasher has blood on his clothes, but not the slashee. Maybe I was just looking anywhere for something to stand out because nothing in the storytelling was doing the job.