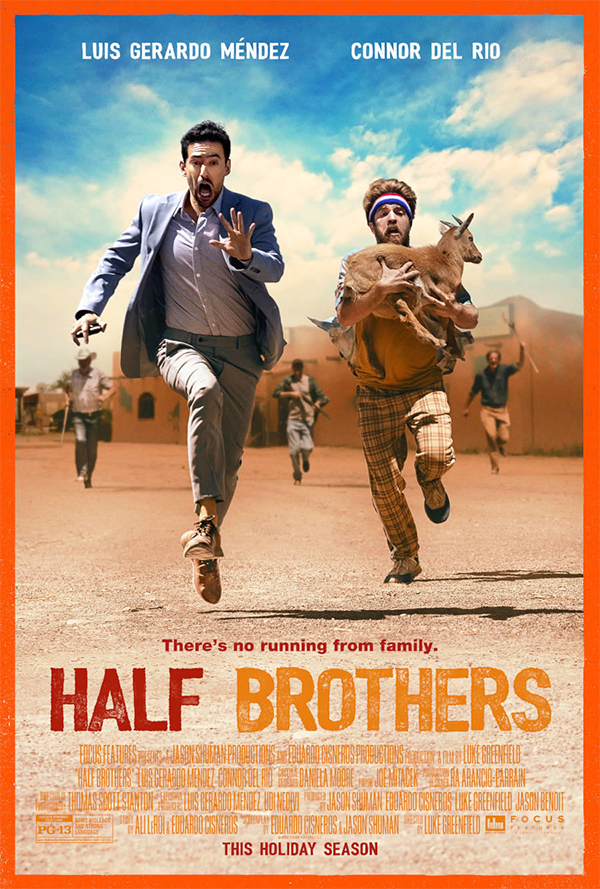 If you love comedy, chances are you have seen Step Brothers, a film about two man-children who are in their forties and still live at home with their parents. That film is a comedic gem. Now comes Half Brothers, about two grown men who learn they are related by their father from his death bed. While both films are idiotic, at least Step Brothers went that extra mile to deliver the laughs. Half Brothers, is barely half as entertaining or original.

Renato (Luis Gerardo Méndez) is a successful aviation executive who is only a few days away from getting married. Although his fiancée loves him, she feels he is not ready to be the kind of father that her son needs him to be.  Because Renato’s father (Juan Pablo Espinosa) left Mexico in search of a better life for his family but never returned, he grew up believing that anything he needed, he would have to accomplish on his own. This way of living made Renato bitter and basically friendless.

When Renato gets a call from a woman claiming to be his father’s wife in America and that he is dying, Renato is both shocked as-well-as angry. Despite not wanting to go to America to see his father before he passes, Renato’s fiancée insists that he makes the trip because she feels his father is the source of many of his issues.  He of course makes the trip, only to discover that his father started a new family which includes a half brother named Asher (Connor Del Rio).

From the moment Renato meets Asher, he despises him. Regardless, the pair go on a scavenger hunt/road trip that their father set up for his dying wish. They are promised that by the end of this trip, they will both understand the full story of why everything turned out they way it did. Obviously, Renato will learn to love his new off-beat sibling by the film’s end but that is just part of this long-running formula.

Directed by Luke Greenfield who helmed a couple comedies in the early 2000’s that I enjoyed like The Animal and The Girl Next Door, his latest film doesn’t deliver a single memorable moment. Both Del Rio and Méndez try their best with the material they are working with, but many of the attempts at broad humor fall flat and the would-be heartfelt moments in the final act just don’t feel authentic. Half Brothers isn’t a terrible film and at times it is mildly entertaining thanks to Greenfield’s ability to keep the story moving and a nice pace. Unfortunately, this isn’t a family I can recommend spending your holiday with.