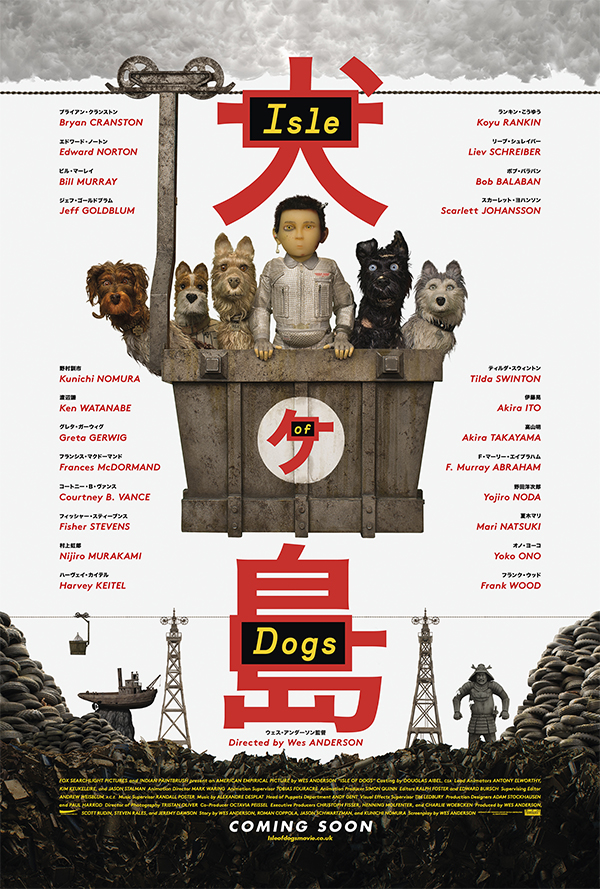 Let me start this review off by stating that I am not a Wes Anderson fan.  I know many love his films, but I am not one of them.  With the-exception-of “Bottle Rocket”, “Rushmore”, and “Fantastic Fox”, I find sitting through his works to be quite a chore. Having said that, I must say that his latest film, “Isle of Dogs” is my favorite of his to date. Not only that, but probably one of the best animated films of the last few years.  I am a huge stop-motion fan, and the work here is incredible.

Set in a dystopian near-future Japan, the entire dog population has been banished to Trash Island, to stop the spread of a dog flu virus.  One of the dogs sent to the dumping ground happens to belong to Atari Kobayashi (voiced by Koyu Rankin), the mayor’s orphaned nephew.  Atari crashes a small plane onto trash island and begins his search for Spot.  Helping the boy find his best friend are a group of dogs who want to see the pair unite.  There is Rex (voiced by Edward Norton), King (voiced by Bob Balaban), Boss (voiced by Bill Murray), Duke (voiced by Jeff Goldblum) and a reluctant Chief (voiced by Bryan Cranston).

While Atari and the dogs search for Spot, Professor Watanabe (voiced by Akira Ito) is back in japan trying to find a cure for the dog flu. The story takes us back-and-forth from the island and Japan, but I found the dogs much more interesting than the humans.  Cranston is wonderful here and I loved how the relationship grew between Chief and Atari.  The writing here is quite fresh. That has never been an issue of mine when it came to Anderson’s films. It’s more his direction.  However, his visual style works beautifully when it comes to stop-motion animation.  He has created awe-inspiring world and I was completely taken in by it.  Anderson also has an amazing voice-cast to bring his characters to life.

“Isle of Dogs” is much more adult animated film, though I do believe it’s fine for older children. I can’t imagine this not getting attention at the Academy Awards for best animated film.