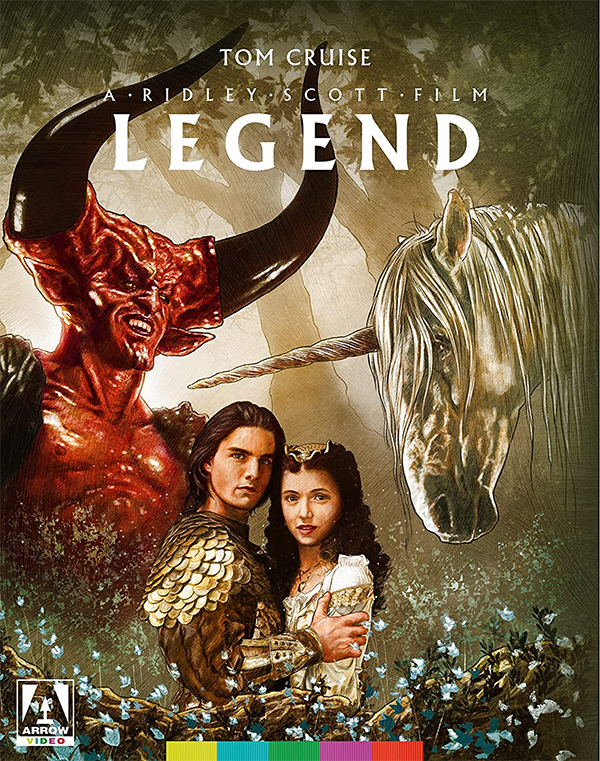 Ridley Scott’s 1985 dark-fantasy Legend gets a truly beautiful looking Limited Edition release, courtesy of Arrow Video. The early 80’s brought a handful of films in the genre that I was a fan of, even if they were not all great.  Krull, The Dark Crystal, The Beastmaster, Clash of the Titans and The Neverending Story are just some of the titles that come to mind. My feelings towards Legend have always been mixed.  While I loved the world that was created and the visual spectacle of the film, the story just never quite clicked. Much of it had to with how badly the US release was edited, as I didn’t get to see Scott’s superior director’s cut until I was much older. While the 113-minute Director’s Cut is included on the second disk of this release, it is the 90-minute US Theatrical Cut that gets the new 2K restoration.

In this dark fairytale, the Lord of Darkness (Tim Curry) wants to have the sun set for the very last time and bring permanent night to the world. To do this, he must sever the horns of the last two remaining unicorns. With the help of some nasty little goblins, the unicorns, as well as Princess Lili (Mia Sara) are taken prisoner. However, the Lord of Darkness has fallen in love with his captive (Lili, not the unicorn), and he wants her to spend eternity at his side. This doesn’t sit well with Jack (Tom Cruise), a young innocent boy, who also loves Lili. Along with a group of magical forest creatures, Jack goes on a quest to save both the princess and the unicorns and stop the everlasting darkness.

To this day, Rob Bottin’s make-up design work on Tim Curry remains one of my favorites. The actor’s performance underneath all of those prosthetics is just as impressive 35 years later. Legend is at its’ best when it is focused on the Lord and Lili within the lair. That goes for both cuts of the film. The new 2K restoration looks wonderful and even the darkly lit scenes, where the film’s villain resides are well detailed.

While loaded with bonus features, most of them are ported over from previous releases. However, there are other extras worth noting, like the illustrated perfect-bound book, double-sided poster and glossy full-color cast portraits. This is definitely one for the collectors.