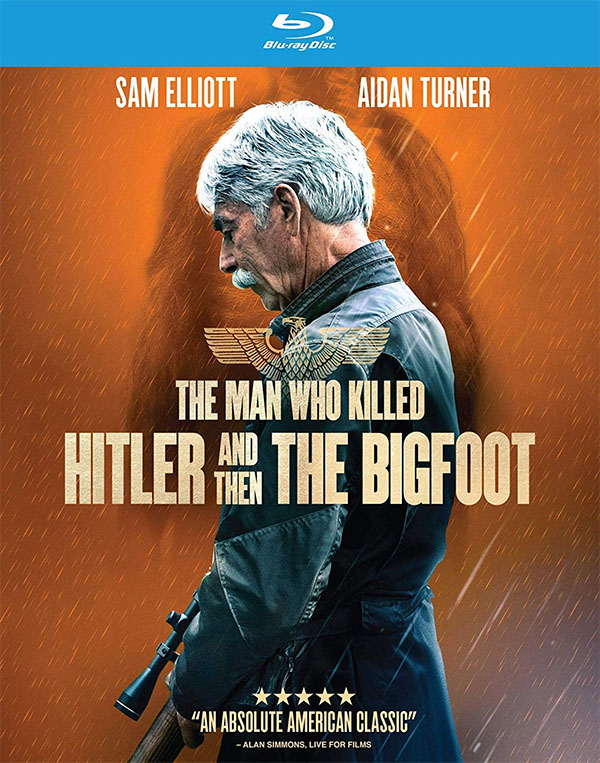 Arriving this week on Blu-ray and DVD is writer/director, Robert D. Krzykowski’s “The Man Who Killed Hitler and Then the Bigfoot”. The film is exactly what the title suggests, but the story is much more character driven than one would expect. The problem here is that we essentially get two different stories that just don’t connect. If it wasn’t for the casting of Sam Elliott as the lead, this could have been unwatchable.  Thankfully, Elliot’s performance was strong enough to at least hold my interest for at least three quarters of “The Man Who Killed Hitler”.

The story centers on Calvin Barr (Elliott), a war veteran who assassinated Hitler when he was younger. Aidan Turner plays Barr in flashbacks. Calvin now lives a quiet life with his dog in the suburbs. His only relative is his younger brother Ed (Larry Miller).  Although Calvin is in his golden years, he hasn’t lost the ability to kick some ass. Just ask the group of young thugs he takes down when they try to steal his car.

“The Man Who Killed Hitler” is quite good when we are taken back to Calvin’s younger days and showing us who he became later in life.  Unfortunately, the final act is where things fall apart.  Calvin is recruited by the government to use his tracking skills to hunt down the Bigfoot monster and kill it.  The reason being that the creature is carrying a virus that is killing all wildlife in Canada (expect for birds) and if it makes its way into an area populated by people, it could be the beginning of the end of the world.  Calvin doesn’t want to do it, but since he is the only one immune to the virus who is capable-of-killing Bigfoot, he doesn’t have much of a choice. Yes, the Bigfoot portion of the story is as ridiculous as it sounds, and it just doesn’t feel like it should be part of the story. Maybe this would have been better if Calvin was to assassinate another person instead of a mythical creature, but we will never know.  If you are a fan of Elliot, you may want to give this a look just for him, but aside from that, I can’t recommend “The Man Who Killed Hitler”.