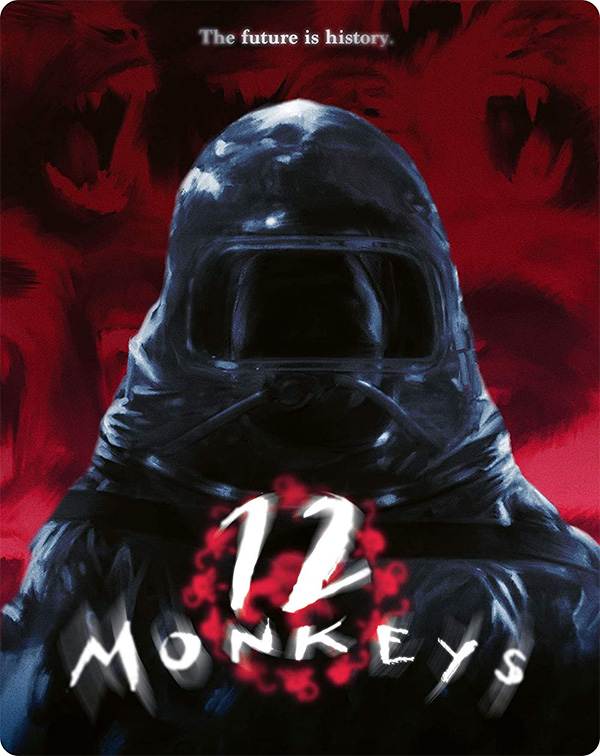 In 2018 Arrow released a Special Edition Blu-ray of the 1995 sci-fi classic, 12 Monkeys that I sadly missed out on. I am a huge fan of not only the film, but also the television series that followed. Bruce Willis gives what I consider one of his best performances and Brad Pitt stole every scene he was in. Thankfully, Arrow is releasing a limited edition Steelbook this week and I am so glad to have gotten my hands on one.

For those of you who have never seen the Terry Gilliam film, the story follows James Cole (Bruce Willis), a prisoner in the future, who is offered a full pardon if he volunteers to travel back in time to collect information that could help the scientists develop a cure for the man-made virus that wiped out most of the human population. He is not supposed to stop the virus from being released, but just gather information.

Cole does make it back in time, but he arrives in 1990 instead of 1996, which is when he was supposed to arrive. With his mind pretty much swiss cheesed, Cole is arrested and sent to an asylum. All the doctors think he is a nut case, but Dr. Kathryn Railly (Madeline Stowe) believes there might be more to Cole than what everyone else can see. Cole does get set free from the asylum and eventually gets to 1996, which is when the army of the 12 Monkeys let loose the virus. It turns out that fellow asylum patient Jeffrey Goines (Brad Pitt) is the one behind the evil plan. Yep, there is quite a bit of time travel mumbo jumbo here, but the film is so unique and entertaining, that I have no problem just going with it.

The Blu-ray looks great and is a huge improvement over the 2009 release. I am not quite sure if this is the same 35mm negative restoration that was released in 2018, but even if it isn’t, I was quite pleased with the presentation. There is the optional DTS 5.1 Master Audio and 2.0 stereo soundtracks. I went with the former and although not as impressive as I would have hoped, I really couldn’t find anything to actually complain about. I love the steelbook art designed by Matt Griffin and the included booklet is a nice addition. If you are a fan of 12 Monkeys and don’t own the previous Arrow release, I recommend picking up the steelbook.