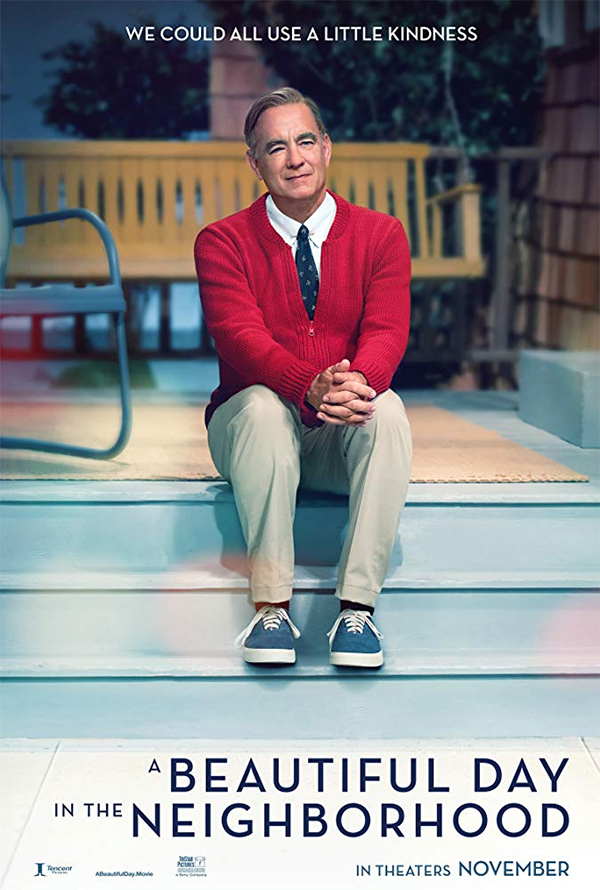 Last year’s biographical film “Can You Ever Forgive Me”, which stared Melissa McCarthy as a failing author who turned to forgeries as a-means-to make a living. Unfortunately, my viewing of the film took place on a tiny airplane seat screen. Never-the-less, it showcased what director Marielle Heller was capable off. Needless-to-say, I was looking forward to her follow-up, another biographical film involving Mister Rogers. Unfortunately, despite some strong performances, and some bold directorial choices, I just couldn’t get into “A Beautiful Day in the Neighborhood”.

Based on the 1998 article, published by Esquire Magazine, “A Beautiful Day in the Neighborhood” centers on the cynical, Lloyd Vogel (Matthew Rhys), a journalist who has made a career out of exposing the truth. Lloyd and his wife Andrea (Susan Kelechi Watson) are new parents, which isn’t easy, especially when work sends Lloyd off on assignments. When Lloyd’s editor (Christine Lahti) assigns him to profile Mister Rogers, he is less than thrilled. It is his cynical nature to dig for the dirt, no matter how many childhood memories could be ruined by finding skeletons in the famous children’s show host’s closet.

One of the most surprising things to me about “A Beautiful Day in the Neighborhood” is just how little Mister Rogers (played wonderfully by Tom Hanks) is in the film. This is a story more about Lloyd and his issues. Despite Roger’s CEO Bill Isler (Enrico Colantoni) advising against it, Fred agreed only to be profiled by Lloyd. The reason, according to Isler is that Fred loves to work with people who are in some way, emotionally broken. Basically, Fred is a tool here to help Lloyd face the things troubling him in his own life. For instance, Lloyd’s feelings about not only being a father, but his troubled relationship with his own father, Jerry (Chris Cooper).

“A Beautiful Day in the Neighborhood” was not the type of feel-good movie I was expecting, and that is more than fine. However, I found myself incredibly bored throughout. There were also too many instances where I was taken out of the narrative. There is one dream sequence which takes place on the Mister Rogers set that just didn’t work for me.  As I mentioned before, Hanks is fantastic and is seems like he slips into Roger’s red sweater with ease. I could not imagine another actor in the role. I just wish there was more of him in the film.

There are some great moments in “A Beautiful Day in the Neighborhood”, most of them come from one-on-one conversations between Lloyd and Fred and it’s easy to understand why Mister Rogers was such a beloved figure. I haven’t seen last year’s “Won’t You Be My Neighbor” documentary, but it’s safe to assume that one would learn a lot more about who Fred Rogers was from that film, rather then from this one.  Despite the stand-out performance from Hanks, I just can’t recommend “A Beautiful Day in the Neighborhood”.