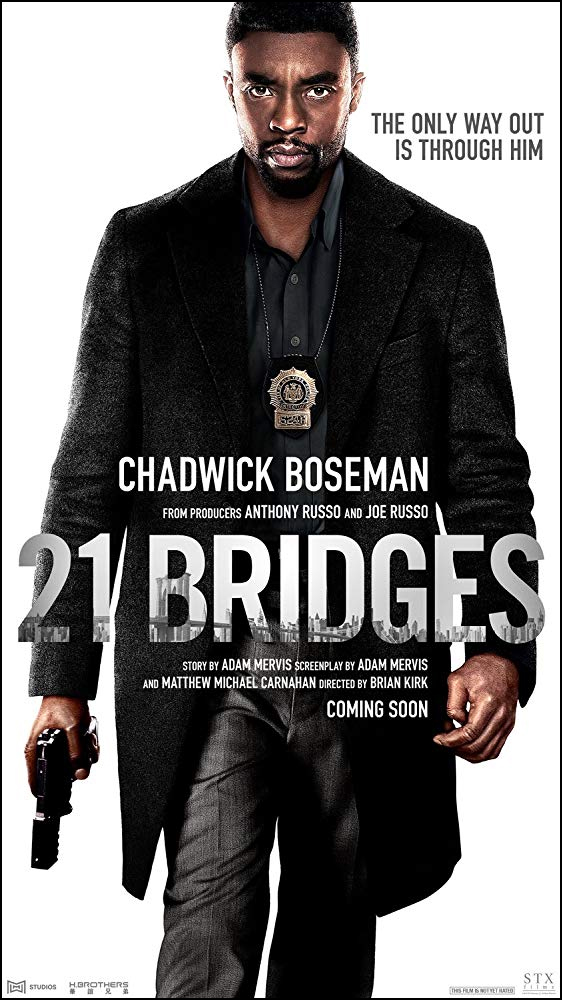 Going into “21 Bridges”, I held out hope that this action-crime-drama would somehow surprise me and not be the paint-by-numbers, predictable thriller we have seen so many times before. After-all, Black Panther himself, Chadwick Boseman not only stars, but it also a producer. MCU directors Anthony and Joe Russo are also a couple of the many other producers involved with “21 Bridges”. Something about the material had to draw them all in. Sadly, this is just another run-of-the-mill cop thriller that is even more predictable than most. I was able to figure out exactly what was going on within the film’s first act.

Set in New York City (but filmed mostly in Philadelphia alleyways), “21 Bridges” follows Detective Andre Davis (Boseman), a man who has a personal lifelong grudge against cop killers, due to his father being killed in the line of duty.

When a couple of small-time thieves, Michael (Stephan James) and Ray (Taylor Kitsch) are involved in a cocaine robbery-gone-bad, they find themselves in a shootout with the NYPD. First of all, I don’t want to give anything away, but the fact that a group of cops were knocking on the window of a bar that was closed and 300 keys of uncut cocaine were being stored there, should pretty much tell you that they had their own reasons for being there. They clearly weren’t responding to a crime. Unfortunately, none of the cops survived the fire fight, so Detective Davis was not able to question any of them. Captain McKenna (J.K. Simmons) wants justice for his dead officers and asks Davis to do what he does best, find and take down the bad guys.

Joining Davis is narcotics officer Frankie Burns (Sienna Miller) and they both have until 5am to locate their targets before the 21 bridges that allow people in and out of Manhattan are reopened. Once they are open, it will be nearly impossible to find them.

“21 Bridges” has a few decent shoot outs, but there is nothing exciting or thrilling going on here. We can see almost every move coming from a mile away. The only scene that stood out to me was when Michael and Ray pay a visit to Adi (Alexander Siddig), a Manhattan based money launderer who can clean the million dollars in cash they got for the drugs they sold. Maybe it stood out because I just didn’t expect the characters to stop to clean their money in the middle of a citywide manhunt. However, it is there were the story begins to shift (even in a predictable way).

Boseman is fine here and he can carry a film (without the aid of Marvel), but he is working with stale material that brings little that’s new to the genre. We don’t get many of these mid-budget crime films at the multiplexes anymore, so I was rooting for “21 Bridges” to work. Unfortunately, this is the kind of unoriginal fodder that should have made its way directly to one of the various streaming services available today.