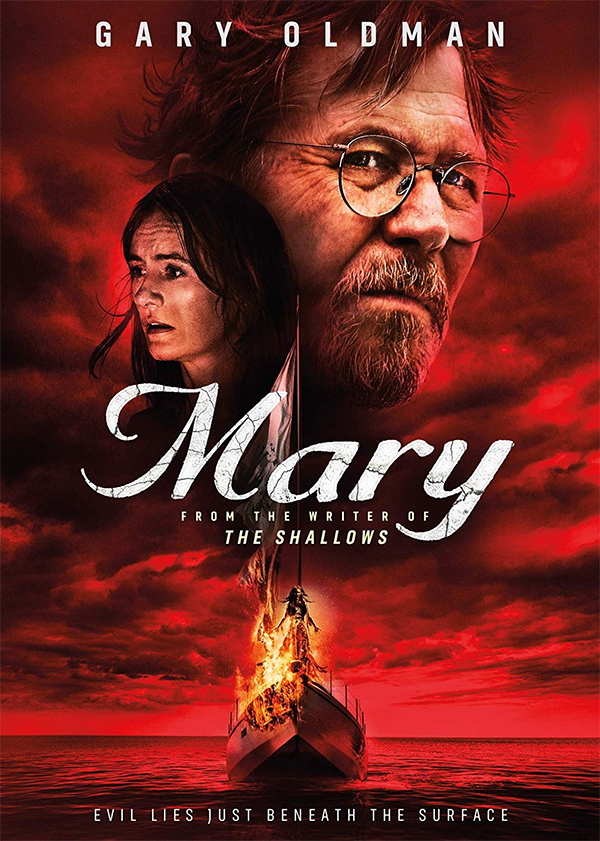 Arriving this week on Blu-ray and DVD is the sea-set horror film, “Mary”, written by Anthony Jaswinski (“The Shallows”) and directed by Michael Goi (“American Horror Story”). However, it is the cast which features Gary Oldman and Emily Mortimer that piqued my interest.  Oldman hasn’t done a lot of horror films, with the-exception-of more high-profile fare like “Bram Stoker’s Dracula” and “Hannibal”. A decade-ago he had a small role in “The Unborn”, but his participation in the genre has been minimal. My hope was that there was something special about the material that drew him in, but now having seen “Mary”, I am quite confident it was the paycheck.

David (Oldman) has been wanting to make a better life for his family. Working for other people on their boats just isn’t cutting it. He finally gets the chance to captain his own boat when he sinks every dime his family has on a fixer-upper, that needs a whole lot of work. The boat isn’t the only thing that needs work, as the relationship with his wife Sarah (Mortimer) is on shaky ground as well. Once the boat is all fixed up, the family, which includes daughters Mary (Chloe Perrin) and Lindsey (Stefanie Scott) take it out for a test run at sea.  David’s friend and first mate, Mike (Manuel Garcia-Rulfo), as well as Tommy (Owen Teague) also join the trip. Things seem to be looking good for the maiden voyage. That is until strange things start to happen.

It turns out that the boat (which is also named Mary), is possessed by a great evil, which has its own plans for the family and crew. The problem with “Mary” is that it is not only incredibly cliched, but to make matters worse, it isn’t the least bit scary. The film has everything it needs to deliver an intense and terrifying experience, including a creepy old boat and the isolation at sea. It also has two great actors in the lead who do everything in their power to deliver strong performances. However, even they can’t work miracles.

“Mary” feels like the kind of film that Nicolas Cage would find himself attached to in recent years, which shouldn’t be surprising since Gary Oldman apparently replaced Cage on this film. Goi is a competent filmmaker and “Mary” is well-shot and looks good for the most part, but much of the issues stem from the writing. Although Jaswinski’s “The Shallows” was a box office success, the film had many of the same cliched issues as “Mary”. However, the jump scares worked much better with the shark. Even the biggest Oldman fans will find very little to enjoy here and I recommend letting this ship sail on without you.