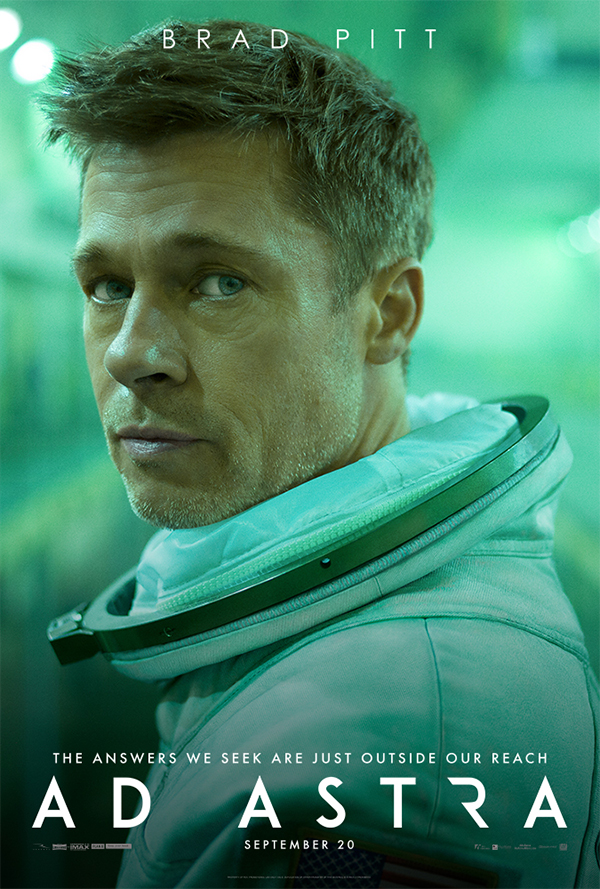 It took me nearly a week from the time I screened James Gray’s sci-fi epic, “Ad Astra” to sit down and write a review for it.  Even now, I am still unsure of how I felt about the film as-a-whole. It felt big and intimate at the same time. This is a very personal story told on a grand scale, and I can’t help but admire not only Gray but also 20th Century Fox for getting behind a project like this. It was without-a-doubt a risky move.  Yet, with all that I admire about “Ad Astra”, I ultimately felt dissatisfied with it. Tone-wise, “Ad Astra” reminded me a bit of 1968’s “2001: A Space Odyssey” and 2002’s “Solaris”, two films that truthfully, I have never been a big fan of.  Yeah, I know. How dare I dislike “2001”!  Listen, not everyone is going to love every film and I was always bored by the Kubrick film.

Set in the near-future, astronaut Roy McBride (Brad Pitt) is sent on a mission through the solar system to try and connect with his father (Tommy Lee Jones), who he believed died years ago. It turns out that the elder McBride might have been hiding out in a research station, running experiments that are causing devastating electrical surges on Earth. If these surges continue, it could destroy the planet. Roy is asked by his superiors to venture into space and attempt to make contact with his father in hopes that he can convince him to stop what he is doing.

“Ad Astra” mostly feels like a very expensive psychological drama with some thrilling sequences thrown in to justify the price tag.  One of those moments, involves a rover chase on the moon surface between, Roy, some astronauts and space pirates. It is a fantastic sequence and unlike any I had ever seen before. There is also another great moment in which Roy must get onto a launching rocket undetected. Unfortunately, despite a strong performance from Pitt, I just couldn’t relate to his character. He never truly seems to care about anything, aside from the fact that his dad is still alive. Through much of the film, he comes across as cold and kind of empty and because this is a personal story narrated by Roy, it makes “Ad Astra” feel cold and empty.

Much like “2001”, I simply had trouble connecting with the film or the characters in it. That doesn’t mean I disliked “Ad Astra” but I think I felt quite indifferent to it. Gray is a gifted filmmaker and I am glad he was given a chance to put his stamp on the genre, even if it didn’t quite work for me.  Despite my feelings, or lack-there-of, I do recommend giving “Ad Astra” a look if you are a fan of sci-fi and want to see something with a great deal of originality.