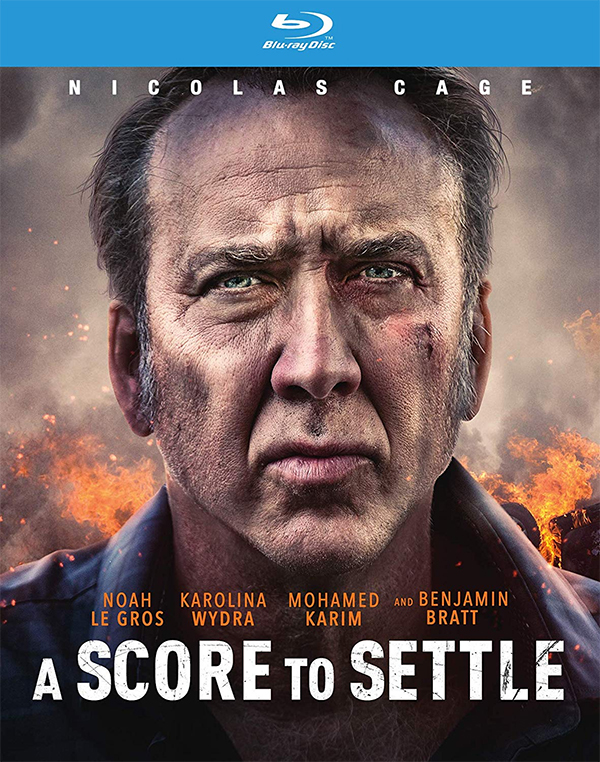 Arriving this week on DVD and Blu-ray is Nicolas Cage’s latest venture into the familiar revenge thriller genre, “A Score to Settle”. It’s been obvious for quite some time that Cage has been accepting roles in these kinds of films for the paycheck, but I have come to the realization that he seems to be purposely picking the exact same character over and over again so he can just get through the production as quickly as possible. When you essentially keep playing the same part, time after time, your performance becomes like a well-oiled machine. To me the gifted actor is wasting his talents, but if its about the money and little else, I guess I can’t blame him. I would probably do the same thing.

Once again, Cage is playing a broken man, this time named Frank.  Fresh out of prison, all he has in this world is his son Joey (Noah Le Gros). Well, he also has a big bag of cash that he stashed away before doing his time. Frank took the rap years ago for a murder that his mob boss was responsible for. In exchange, he was promised that his family would be taken care of. The promise was not kept. His wife died and his son became a junkie. Naturally, Frank wants revenge and he starts picking off his old crew, one by one. When he is not killing his former associates, Frank and Joey are staying in a lavish hotel and shopping. Frank just wants to make the lost time up to his son, but Joey doesn’t trust his dad.

“A Score to Settle” is at its’ best when it focuses on Frank and Joey’s relationship. Maybe it’s because this is one of the very few films of its kind where Cage’s character isn’t out for revenge over his child’s death. This does bring me to an annoying twist in the film, that I should have seen coming, but surprisingly didn’t.  I just didn’t buy it.  Most of Cage’s revenge thrillers aren’t good and this fits in well with the rest. It doesn’t matter how much you may love the actor, he isn’t delivering anything of substance here.