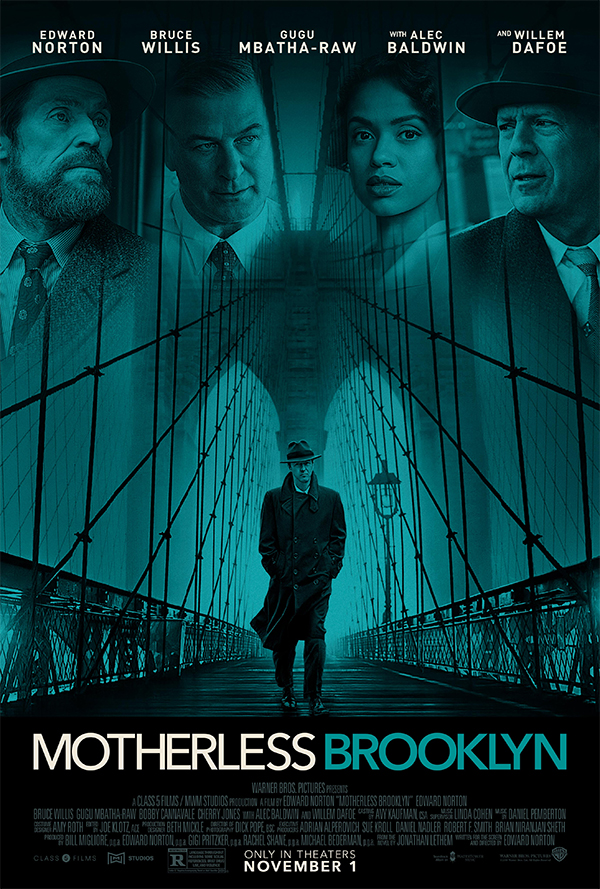 Lionel Essrog (Edward Norton), a lonely private detective living with Tourette Syndrome, ventures to solve the murder of his mentor and only friend, Frank Minna (Bruce Willis). Armed only with a few clues and the engine of his obsessive mind, Lionel unravels closely guarded secrets that hold the fate of New York in the balance. In a mystery that carries him from gin-soaked jazz clubs in Harlem to the hard-edged slums of Brooklyn and, finally, into the gilded halls of New York’s power brokers, Lionel contends with thugs, corruption and the most dangerous man in the city to honor his friend and save the woman who might be his own salvation. Oscar nominee Edward Norton (“Birdman or [the Unexpected Virtue of Innocence],” “American History X,” “Primal Fear”) directed, wrote, produced and stars in “Motherless Brooklyn.” The film’s stellar ensemble cast also includes Bruce Willis (the “Die Hard” films, “Moonrise Kingdom”), Gugu Mbatha-Raw (“A Wrinkle in Time”), Bobby Cannavale (“I, Tonya”), Cherry Jones (“Boy Erased”), Michael Kenneth Williams (“When They See Us”), Leslie Mann (“The Other Woman”), Ethan Suplee (“The Wolf of Wall Street”), Dallas Roberts (“Dallas Buyers Club”), Josh Pais (“Ray Donovan”), Robert Ray Wisdom (“The Fix”), Fisher Stevens (“The Blacklist”), with Oscar nominee Alec Baldwin (“The Cooler,” “BlacKkKlansman,” “The Departed”) and Oscar nominee Willem Dafoe (“At Eternity’s Gate,” “The Florida Project”).

Now, let’s get to the part on how you win passes to see an advance screening of MOTHERLESS BROOKLYN. The first group of people to head over to the following link will score passes to the screening. Hurry up and grab yours before they are all gone. wbtickets.com/MBTFJMIA