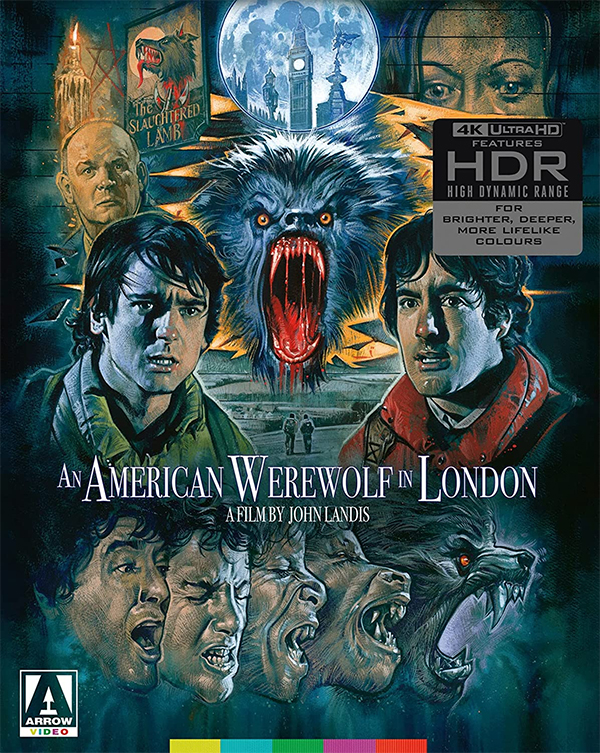 The 1981 horror-comedy, An American Werewolf in London from writer/director John Landis happens to be my favorite werewolf movie to date, with Joe Dante’s The Howling coming in second. Interestingly, enough both films were released in the same year.  This week Arrow Video released the 4K restoration of the film, which comes jam-packed with all kinds of extras, much like their 2019 Blu-ray release.

The story centers on a couple of Americans, David and Jack (David Naughton and Griffin Dunne), backpacking through Europe. While out in the countryside, they are attacked by an animal. David was bitten but Jack was killed.  When Jack starts appearing to David as one of the undead and informing him that they were attacked by a werewolf, David begins to think he is losing his mind. Thankfully for David, his nurse (Jenny Algutter) has taken a liking to him and invited David to stay with her. However, Jack’s warnings come-to-pass and David does transform, taking a handful of lives with him.

This brand new restoration was done exclusively by Arrow Video. The original 35mm camera negative was scanned and restored in 4K and presented in HDR10 & Dolby Vision. Arrow video also remastered the 5.1 DTW-HD audio. Let me start off by saying that for me, the 2019 Blu-ray that Arrow released was near perfection. If you already own that release, I don’t think it is necessary to upgrade to the full 4K Presentation. Having said that, there are some noticeable upgrades. While the picture does tend to have a darker tint than the Blu-ray, there are moments here when the images really pop. Perfect examples would be some of the fresh bloody make up effects like with Jack’s face and the werewolf attack with all the neon lights in London in the final act. There images look absolutely stellar. I definitely prefer the 5.1 audio over the 1.0 mono, but everyone will have their own preference for that.

There is so much to love in An American Werewolf in London, however it is the incredible creature effects and sense of humor that have always stood out to me the most.  Included with the abundance of bonus content are two feature-length documentaries, “Mark of the Beast” and “Beware the Moon”. A double-sided poster and postcards are included, but my favorite addition would be the booklet with writing from Travis Crawford and Simon Ward.  This is a must-own for anyone who loves this film as much as I do.

Parts of this review were taken from my coverage of the 2019 Blu-ray.