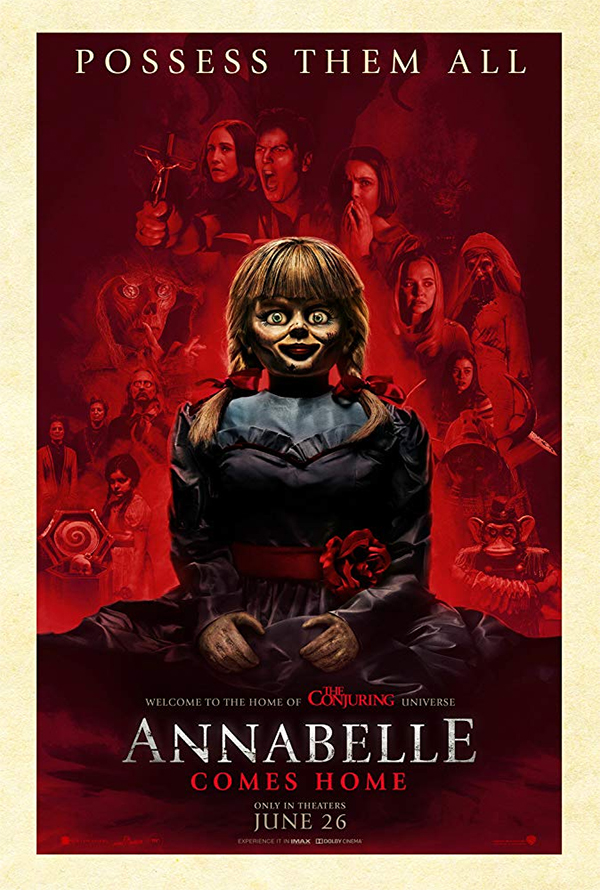 Hard to believe that we are already on our third “Annabelle” film. If you count the doll’s introduction in “The Conjuring”, “Annabelle Comes Home” could be considered her fourth film.  I think the most surprising thing though is that “Annabelle Comes Home” will be battling it out with another evil doll film, “Child’s Play” which was released just a few days ago.  What a great time to be a horror fan!  So how does the latest installment compare to the rest? Well, it is a great deal better than the first film, but nowhere near as good as “Creation”. Having said that, there is still enough spooky stuff on display to recommend it.

“Annabelle Comes Home” opens with the moment from “The Conjuring” where Ed and Lorraine Warren (Patrick Wilson and Vera Farmiga reprising their roles) remove the doll from the apartment it was haunting. They bring it to their home and lock it in a display case where the evil is contained. This case just so happens to be in the room where all the possessed items they have collected are kept.  It is not a room one would want to mess around in.

When Ed and Lorraine take a trip, they leave their daughter Judy (Mckenna Grace) with her babysitter, Mary Ellen (Madison Iseman). Everything is going nice and smoothly, but when Mary’s best friend Daniela (Katie Sarife) stops by and forces her way into the collection room, things start to get freaky. Of course, Annabelle’s display case has a sign on it that reads “Do Not Open Under Any Circumstances” and of course Daniela opens it and of course, Annabelle’s evil gets out, along with some other evil spirits.  Once the evil starts taking over the Warren’s home, that is when “Annabelle Comes Home” gets interesting.

One of the film’s best sequences involve Mary walking around the home with coins dropping around her.  Director Gary Dauberman does a great job building the tension and keeps the audience on the edge of their seat. Unfortunately, a silly ghostly werewolf sequence involving the Warren’s neighbor who has crush on Mary isn’t nearly as effective. Also, if you are expecting Wilson and Farmiga to have substantial roles here, you will be disappointed. They are merely supporting players and you will have to wait for “The Conjuring 3” to get more of them.

“Annabelle Comes Home” is a decent horror film and could be one of the better ones of the summer. It just doesn’t offer much that is fresh.  If the studio wants to keep this franchise going, they may want to get a bit more creative with it.