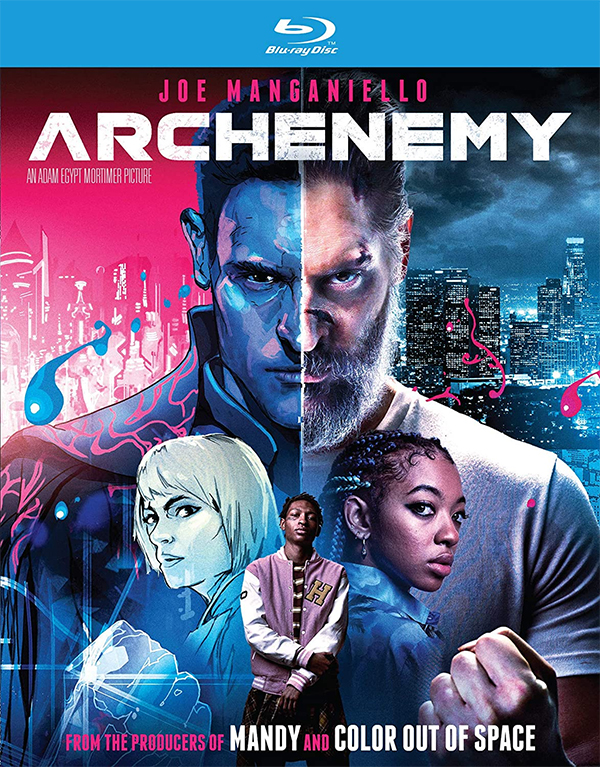 Arriving on Blu-ray this week is writer/director Adam Egypt Mortimer follow-up to his 2019 trippy psychological chiller, Daniel Isn’t Real. His latest, Archenemy is another example of how the filmmaker can seemingly bend genres to his will. This is a very, different kind of superhero film. The best way I can describe Archenemy, is if you took the first half of Peter Berg’s Handcock and made it dark, brutal and serious.

Hamster (Skylan Brooks) dreams of getting a job with a social media giant and show the world the type of interesting stories that he is-able-to deliver. He is finally given a shot to prove himself and on the hunt for a subject that will gain eyes, he meets a drunken homeless man named Max Fist (Joe Manganiello). Hamster starts bringing Max alcohol and food in exchange for stories about how seeming down-on-his-luck man claims to be a superhero. Max tells Hamster that he is from a parallel dimension and his world is called Chromium. While battling his enemy, he was pulled into a wormhole, falling through space and time and landed on Earth without his powers.

Meanwhile, Hamster’s sister Indigo (Zolee Griggs) is working for some very, dangerous drug dealers. When she fails at a task given by her boss (Glenn Howerton), Indigo earns a target on her head, along with her brother. Although Max may not have his super strength, he can still pack a mighty much and decides to do his best to protect the siblings, while dishing out a can of whoop ass on those who want to harm them.

Archenemy isn’t as strange as Mortimer’s previous film and those looking for some sort of straight-up comic book film might find themselves disappointed. One of the strongest aspects of the film is Manganiello going all-in on the role. I have felt the actor rarely gets acknowledged for just how much of a skillful actor he is. Just look at his performances in both Magic Mike films. I very much hope we get to see him truly take on DC’s Deathstroke in the future.  If you like your superhero movies dark and different, I recommend you give Archenemy a watch.