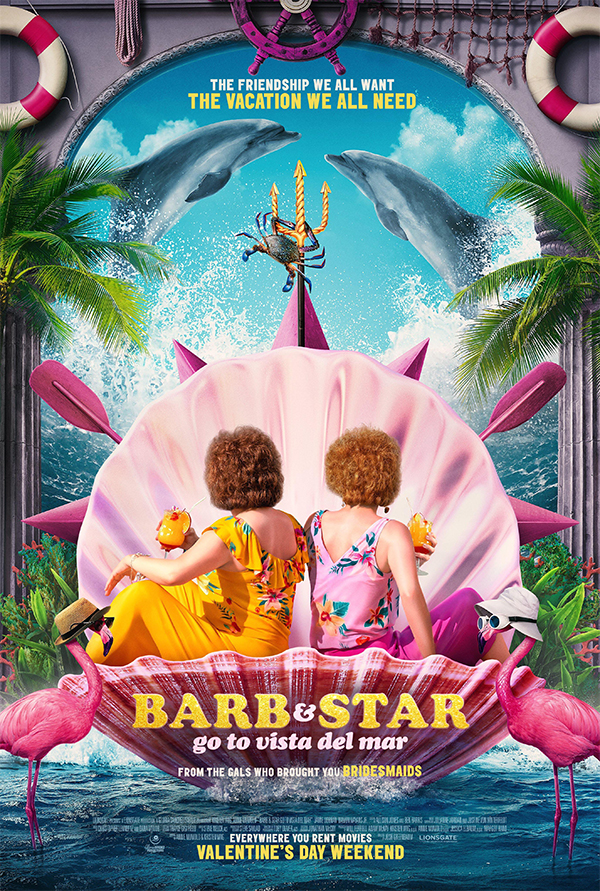 The new comedy Barb & Star Go to Vista Del Mar has a lot going for it. First off, Kristen Wiig and Annie Mumolo are two extremely funny individuals, and this is their follow-up screenplay to the hit Bridesmaids. Second is the creative marketing campaign that found a way to successfully keep the film’s actual plot under wraps while still delivering appealing trailers and posters. Third, since the pandemic, there has been a serious lack of high-profile comedies and we live in a time where it just feels like everyone needs a good laugh. That is why it saddens me to say that there is little in Barb & Star that’s actually funny.

Barb (Mumolo) and Star (Wiig) are best friends/co-workers/roommates that have just lost their retail job. Not only that, but they have been kicked out of their weekly talking club for lying about losing their jobs. Despite being out-of-work, Star convinces Barb to go on a week-long trip to a beautiful beach-town of Vista Del Mar.

What you most likely do not know about the film is that there is more to the story which was left out of the trailers. Much like the Austin Powers films, there is an evil person (surprise casting) living in a high-tech lair set out to kill everyone in Vista Del Mar with genetically altered mosquitoes. The reason for this is due to the constant bullying she suffered there as a child. Her number one henchmen Edgar (Jamie Dornan) is on location to make sure the plan goes off without a hitch.

There are moments when Barb and Star’s constant jabbering does deliver some slightly amusing dialogue, especially when they are discussing a fictional friend named Trish. However, for the most part, the characters annoyed me more than entertained. That is the biggest problem here. When you can’t stand the characters that are on screen the most, it is hard to find much enjoyment. Dornan gives us a-very-different kind of performance than that of Christian Grey and although he isn’t completely successful in the role, I give him credit for letting it all out here. Damon Waynans Jr. as the spy who can’t keep a secret is mildly amusing here but he has a very minor role.

If I was to say one positive thing about Barb & Star Go to Vista Del Mar is that Production Designer Steve Saklad, Art Director Rafael Mandujano, Set Decorator Mariana Castañeda and Costume Designer Trayce Gigi Field have all come together to deliver one of the most visually striking comedies I have ever seen. The colors, sets, locations look absolutely stunning with the bright and flashy color pallets. A lot of work and detail went in to make not only the sets but the costumes look great.  I wish everything else was as appealing.