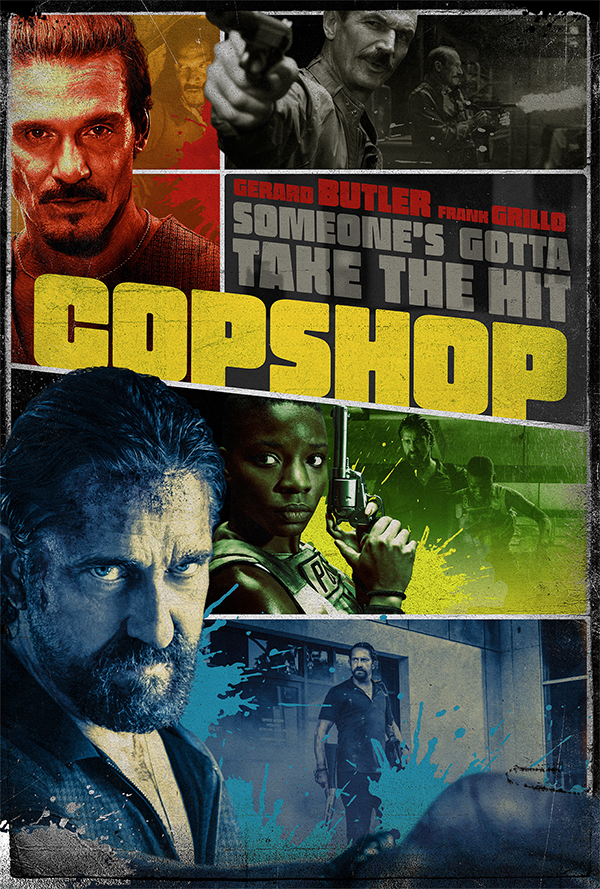 Director Joe Carnahan’s last two features went from forgettable (Stretch) to downright awful (Level Up). His latest film, Copshop is a darkly comic action thriller that is set mostly in a single location and at times, works wonderfully. Carnahan builds with a series of fun moments and compelling banter between the main characters, thanks to the screenplay he co-wrote with Kurt McLeod. Unfortunately, things go in a predictably uninteresting direction with a final act that left me unimpressed.

Teddy Murretto (Frank Grillo) is on the run from the mafia. A hitman is after the fast-talking con artist and the only way he sees himself surviving the night is by sucker punching officer Valerie Young (Alexis Louder), which puts him in a small-town Nevada jail cell. Thinking he is safe for the time being, his main focus is to make sure his ex-wife and son are OK, as he believes they are in danger too. Unfortunately, he can’t get a hold of them during his one phone call from jail.

It doesn’t take long for hitman Bob Viddick (Gerard Butler) to get himself arrested by pretending to be a drunk driver and almost running over a couple of state troopers. This gets him placed in a jail cell directly across from Teddy.  Since nobody is inside the holding cell aside from Bob, Teddy and a passed-out-drunk civilian, the two begin to have their exchanges.  Bob is a very patient man and has no problem waiting for the opportunity to wait for his target. However, that all changes with a competing assassin named Anthony Lamb (Toby Huss) shows up at the police station, guns down almost every cop in the building and has his sights set on Teddy.  Obviously, this frustrates the hell out of Bob.

Huss brings a bit of much needed chaotic energy to Copshop as the psychotic hitman, whereas Butler’s Viddick is more of just a guy who is trying to get his assassination work done, nice and tidy. Obviously, Teddy doesn’t want to get killed by either of these men and Officer Young, who happens to be one of the last surviving officers in the building has no idea which man to trust, and she will need to trust at least one of them after getting herself shot (literally) in the gunfire.

Copshop may be flawed, but there is still plenty here that I enjoyed. Tone wise, I would put the film along the lines of Carnahan’s 2006 action ensemble Smokin’ Aces. The cast is good, especially Grillo who seems to inject a little more life into this character than he normally does. If you are a fan of the director or the leads, I have no issues recommending this one for fans of a decent shoot-em-up.