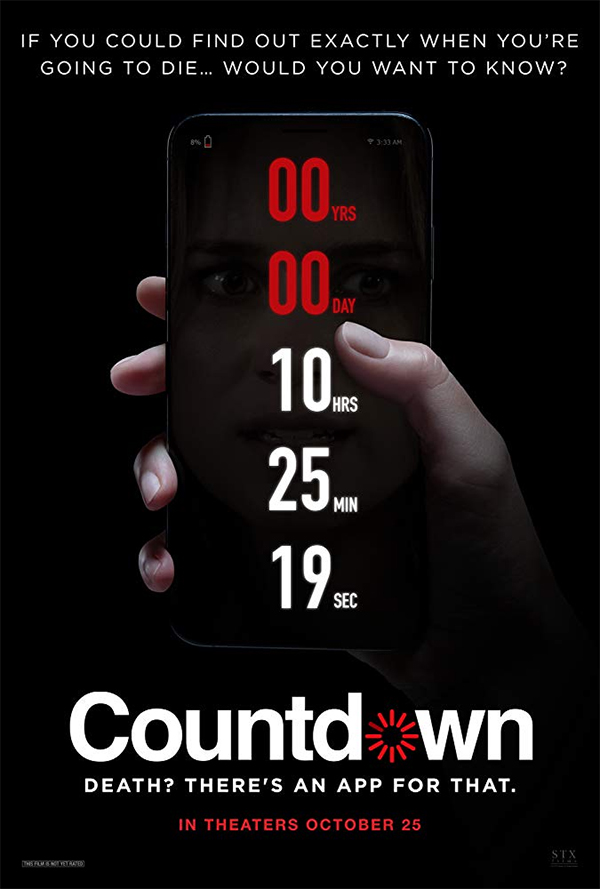 What if there was an app that you could download onto your phone that would tell you the exact moment you would die, would you want to know?  I know I sure-as-hell wouldn’t. That is the premise behind writer/director Justin Dec’s feature film debut, “Countdown”, a new horror film that is about as generic as its title. That doesn’t mean it isn’t good for a few sporadic scares and some decent tension. If you are like me and need at least one new horror film to see in a theater during the Halloween season, this is the only one to be getting a wide release. October has been surprisingly empty for  horror films at the multiplex this year.

During the opening minutes of “Countdown”, a group of teenagers at a party begin talking about this new app that tells you when you are going to die. Of course, this being a horror film, they all download it (without reading the user agreement) and learn how long they have left.  Most of them have plenty of years to go, but one of them apparently only has a few hours left. Even though they are sure the app is fake, the young woman is still feeling uneasy.  Of course, she dies and even though it’s a solid moment, it would have been much better if the way she went wasn’t spoiled in the film’s trailer.

Cut to the next day, Quinn (Elizabeth Lail of Netflix’s You), a nurse at the hospital downloads the app out of curiosity (yeah, smart move), when the dead girl’s boyfriend tells her about it (who of course is about to die as well).  It doesn’t take long for Quinn to realize she made a big mistake that not even buying a new phone with new number and fresh sim card can remedy.

Quinn is not alone either. When Matt (Jordan Calloway) overhears her talking to the cellphone store owner about the app, he realizes she is in the same situation he is and they team up to try and find a way to beat the app. This includes reaching out to the film’s most entertaining character, Father John (P.J. Byrne), a priest who knows all about demons and is all too excited about what is going on with the countdown app. Aside from Father John, the only other character that is at least mildly interesting is Dr. Sullivan (Peter Facinelli), unfortunately his character’s ark is so one-dimensional and pretty-much useless in the overall narrative.

“Countdown” is  a “Final Destination” rip-off with less inspiring kills. However, the film does have its moments and at the very least, I did find it mildly entertaining. Truth-be-told, I expected “Countdown” to be terrible based on the trailer and title alone. Those desperate for a horror movie night out, your options could be much worse.