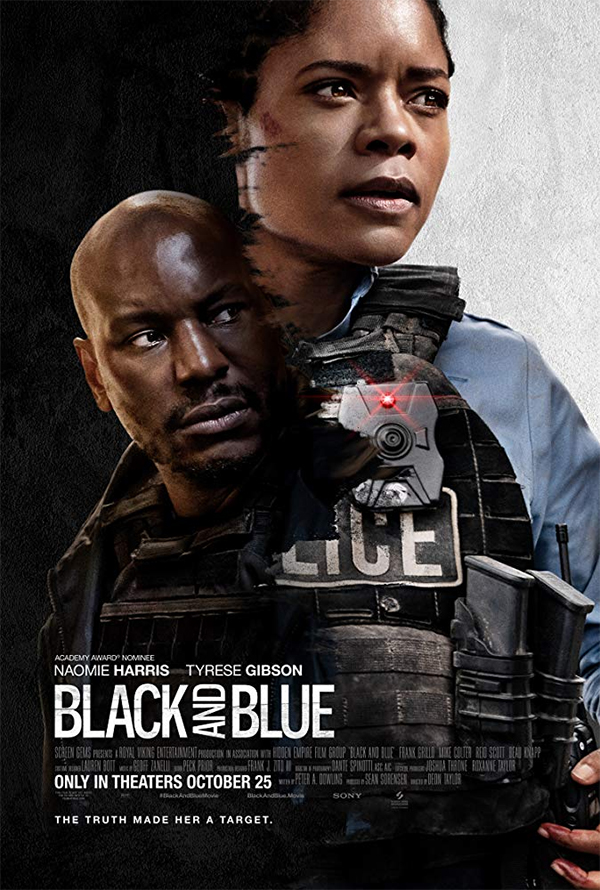 Deon Taylor is one of the busiest filmmakers working today. Not only did he helm last May’s thriller “The Intruder” but he also has two more titles about to be released. One of them is a sequel to the comedy “Meet the Blacks” which should be arriving soon. The other is the crime-drama, “Black and Blue” starring Naomie Harris and Tyrese Gibson. Unfortunately, quantity doesn’t equal quality. Much like “The Intruder”, we are given another paint-by-numbers thriller featuring a solid cast in which their characters make stupid decisions in service of moving the story along.

Alicia West (Harris) is a rookie cop trying to find a balance as an officer of the law and a black woman in New Orleans. The balance becomes much more difficult to maintain after West witnesses some of her fellow officers murder a man in an abandoned building.  One of those officers decides to shoot her, not realizing she had a body cam on that recorded the crime. The leader of the bad-cops, Terry Malone (Frank Grillo) wants to make sure she is found and dealt with before that cam makes its way back to the police station and uploaded into the system. He even calls upon local crime kingpin Darius (Mike Colter) who he works with and tells him that Alicia was the one who killed his family member (even though it was Terry and his crew). The only person Alicia knows she can trust is her old friend Mouse (Gibson), who is hesitant to get involved. Of course, he does have a change of heart.

Not only is “Black and Blue” completely predictable, it is downright idiotic most of the time. Every twist we can see coming from a mile away and if it wasn’t for the good performances from Harris, Grillo and Gibson, this film would be a total waste of time. Colter (best known as Marvel’s Luke Cage on Netflix), is unconvincing as the big bad drug dealer, thankfully, his role is limited. Writer Peter A. Dowling has tried and failed multiple times when it comes to thrillers, 2005’s “Flightplan” and 2014’s “Reasonable Doubt” were just as generic as his latest, “Black and Blue”.

Taylor has four more features set to be released within the next year.  Hopefully things turn out better. As for now, I don’t recommend pulling over for “Black and Blue”.