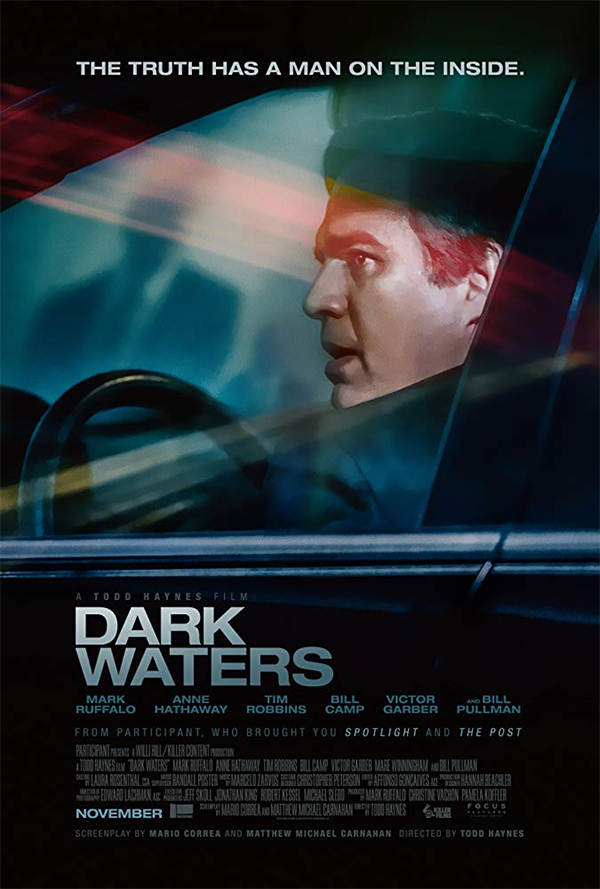 I have always enjoyed legal thrillers like “Runaway Jury”, “The Lincoln Lawyer” and “A Few Good Men”. Although those films were mainly created to entertain, legal thrillers based on true events, haven’t always hooked me. More-often-than-not, they would be preachy, or the legal jargon would be too overly complicated for me to follow. Director Todd Haynes latest, “Dark Waters” reminded me a bit of 1999’s “A Civil Action”, which starred John Travolta and Robert Duvall, a film I enjoyed quite a bit 20 years ago. Although, both films follow a very similar narrative, “Dark Waters” has the benefit of not only being based on real people and events, but also so much of the film feels bleak and hopeless, with a sense of impending dread. That adds to the overall mood of the film but makes us feel the main character’s rage and despair. Mark Ruffalo’s fantastic performance is the centerpiece here.

Robert Bilott (Ruffalo) has just been made partner at his law firm. He has a great working relationship with the senior partner Tom Terp (Tim Robbins) and he has his supportive wife Sarah (Anne Hathaway) at home with their baby. She too worked in law but stepped away to be a mother. Within the same day as making partner, Robert is visited by farmer Wilber Tennant (Bill Camp) who is from the same town in West Virginia his grandmother lives. With great hesitation, Robert visits Wilber’s farm where 190 cows have died due to mysterious illnesses, leaving only 2 left in poor health. Wilber believes that the Dupont company has been dumping toxic chemicals which has been killing his cattle. Robert whose career has been built by defending chemical companies doesn’t want to believe it, but as he looks deeper, he begins to see a common link between the issue at the farm and illnesses in human beings stemming from the Dupont factory.

The more Robert learns, the more driven he becomes to make sure the people in West Virginia are stood up for and that Dupont takes responsibility.  He risks his position at the law firm, his relationship with his family, his income and his health, just to do the right thing. Ruffalo, who is also a producer on “Dark Waters” clearly feels strongly about the story being told and he gives one of his best performances to date.

While watching “Dark Waters”, I couldn’t believe the things that corporations have been able to get away with due to lack of regulations and other issues. I know it shouldn’t surprise me, but this was essentially mass murder over corporate greed and yet, almost every person they were poisoning loved the company. “Dark Waters” does move along slowly and suffers from pacing issues but if you are someone who likes to learn about recent historical events that had a huge impact in our country, I highly recommend you check this one out.