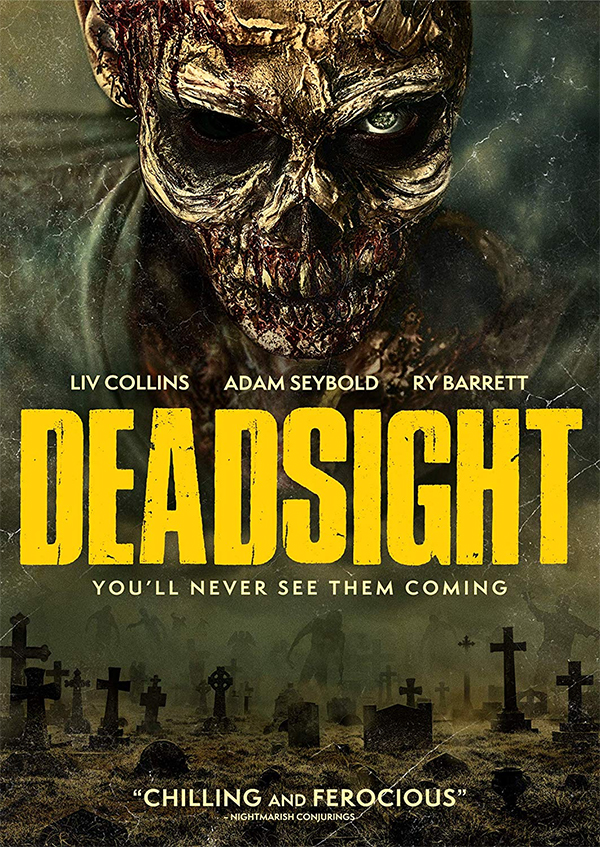 Stop me if you heard this one. A blind prisoner and a pregnant police officer walk into a house…  Haven’t heard it before? That’s probably because it isn’t the set-up for a joke, but a new horror film, called “Deadsight” and it’s quite good. The Jesse Thomas Cook (“The Hexecutioners”) directed feature arrives this week on DVD, VOD and Digital HD.

“Deadsight” stars Adam Seybold and Liv Collins (who also co-wrote the screenplay with Kevin Revie). The film opens on Ben Neilson (Seybold), who is disoriented after the ambulance he was being transported in runs off the road. Ben has a bandage wrapped around his eyes and when he removes it, he can barely see. What little vision he does have does not help due to the pain the light causes. However, it doesn’t take sight for Ben to realize that the people outside the ambulance aren’t quite right. He may not know they are zombies yet, but he has a good sense to get as far away from them as possible.

Ben winds up in an abandoned house, unsure of how he got there. Shortly after, the very pregnant officer Mara Madigan (Collins) makes her way to the house as well. She is quick to help Ben, but not quick to trust him, due-to-the-fact that he is handcuffed to a loose stretcher railing (which he has been using as a tool to fend off the undead).  Although she doesn’t trust Ben, she won’t leave him behind and the two have their work cut out for them if they have any hopes of surviving.

I have said the following many times.  Zombie films are one of the most worn out sub-genres there is.  Between, movies, television series, video games, etc. I feel like we see more zombie films than any other form of horror.  If a film centered on the undead has any chance of grabbing me, it’s got to offer something different.  Now, I have seen pregnant characters in the sub-genre before, but I can’t recall ever seeing one about a blind person trying to survive the threat.  What makes “Deadsight” work so well are the performances from the leads, most notably Neilson who spends most of the film’s runtime with his eyes covered. Collins is also quite good at making her character Mara compassionate, even though she has a baby inside of her and is dealing witch what seems like a hopeless situation.

If you are a fan of zombie flicks, then I do recommend giving “Deadsight” a look. It has some intense sequences, good performances, and makes the best of its obvious budget limitations. It may not be a great film or very original, but it makes just enough adjustments that allows it to feel somewhat fresh.