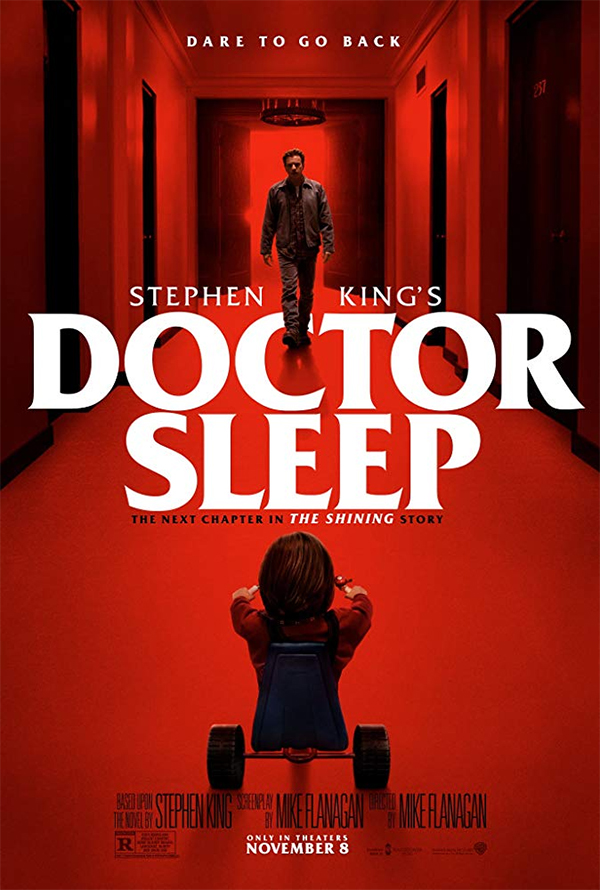 It’s no secret that Stephen King hated Stanley Kubrick’s 1980 adaptation of his best-selling novel, “The Shining”. King felt that the film was missing the story’s humanity. Still, the film has gone on to become one of the most universally loved horror films of all time. It is iconic. Despite King’s feelings, writer/director Mike Flanagan knew he couldn’t proceed with the sequel, “Doctor Sleep” without including elements from Kubrick’s film. Despite Kings initial misgivings, he gave Flanagan his blessing to proceed.  What we get is a sequel that does a fantastic job standing on its own, while still paying tribute to Kubrick’s original vision.

“Doctor Sleep” picks up shortly after the events in “The Shining”. (There is no need to revisit the original film to understand what is going on, but I still recommend that you do.) Danny Torrance (Roger Dale Floyd) and his mother Wendy (Alex Essoe) are now living in a small town. Danny is visited by the spirit of Overlook Hotel head chef Dick Hallorann (Carl Lumbly) who was killed off by Jack Torrance in “The Shining”. Dick teaches Danny how to lock up the ghosts that haunt him by using a trick in his mind, which becomes quite useful.

We are then transported to 2011 where Danny (Ewan McGregor) has grown up and become a drifter with a drinking problem, traveling from town to town, looking for work. He arrives in a small town and takes on a job as an orderly at night and he also joins AA with his new friend Billy (Cliff Curtis) being his sponsor.  Danny likes his new life and uses his ability to help comfort those who are ready to pass on. Meanwhile there is a cult known as the True Knot, led by Rose the Hat (Rebecca Ferguson), who travel around the country, killing people with shining abilities and eating their steam (which is their abilities). This allows the group to live much longer lives than normal and making their shining abilities stronger.

Cut to present day, Rose tracks down a young girl named Abra (Kyliegh Curran), who happens to be even more powerful than the cult leader. Rose decides the girl must die and they must collect her shine. The only one who can help Abra is Danny and he must take her to the only place he knows that would be dangerous for Rose, The Overlook Hotel. The problem is that the now condemned hotel is dangerous for Danny and Abra as well.

“Doctor Sleep” isn’t scary, or at least it wasn’t for me, but the film’s works because of Flanagan’s ability to build tension and tell a story. He is not simply trying to cash-in on pop-culture but trying to entertain the audience and give us characters we can care about. “Doctor Sleep” is a much different story than “The Shining” and at times, a much more interesting one. The 1980 film was an absolutely, beautiful looking film and had a strong sense of isolation, obviously. The sequel is a much bigger story, that takes place over the span of four decades.

McGregor is great as the grown-up Danny and Ferguson is equally as good as the story’s villain, Rose. Carl Lumbly and Alex Essoe due their absolute best to fill the shoes of Scatman Crothers and Shelley Duvall in the roles of Dick and Wendy. One of the most impressive feats, was the recreation of The Overlook Hotel itself. So much work went into the details here. Not just the lobby, hallways and Golden Room but even the minor things like a coffee vending machine which I probably only noticed because I re-watched “The Shining” a few days prior.

“Doctor Sleep” is not perfect. It does run on for too long at just over 150 minutes (only 6 minutes shorter than the first film). There are some pacing issues, but that can be forgiven because for the most part, this adaptation is so well crafted.  Flanagan has become one of the best horror filmmakers working today and he was without-a-doubt the right person to bring King’s novel to the big screen. Although there isn’t a third book, I could totally see the surviving characters continue through another film. I got the sense there was an even bigger story to be told.