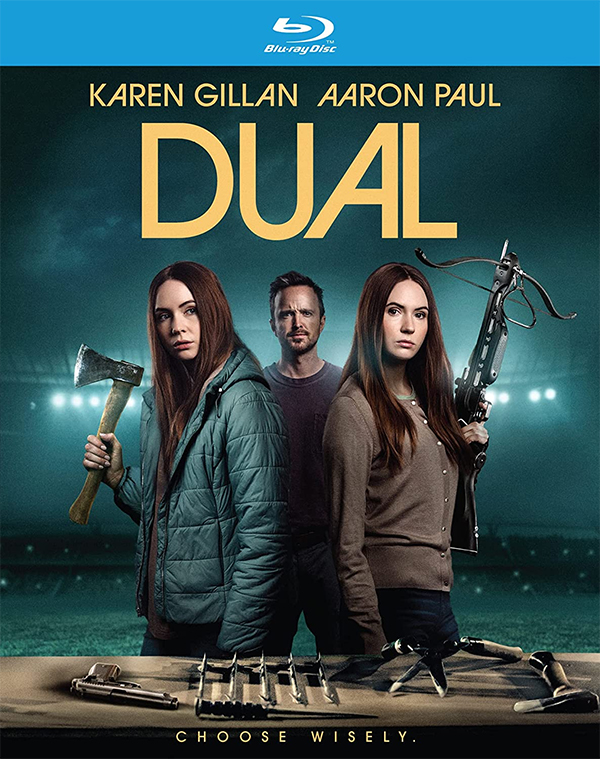 I am a huge fan of writer/director Riley Stearns 2019 film, The Art of Self Defense. I even considered it one of the best films of that year. So of course, I was looking forward to his follow-up satire, Dual, starring Karen Gillan and Aaron Paul. While Stearns creativity and unique perspective to consistent throughout, his latest doesn’t quite come together. First off, this is a more dramatic and often darker tale, but the biggest issue is that the dark humor doesn’t feel as sharp.

Set in-the-near future, Sarah (Gillan) is not living her best life. Not only is she an alcoholic, who suffers from depression, but her boyfriend, Peter (Beulah Koale) is living out-of-state, working his new job. Just as Sarah’s life couldn’t get more depressing, she learns that she is terminally ill, thanks to stomach cancer. This leads Sarah to undergo a procedure to have herself cloned. The double would then takeover her life once she has passed away.

What Sarah didn’t expect was that her double would takeover her life before she even passes away. The new Sarah even has a better relationship with her boyfriend and mother than the original Sarah. This becomes even more problematic, when the original Sarah’s illness goes into remission, and she is no longer terminal. Now Sarah wants to decommission her double, but the new Sarah isn’t having it. This leads to a legal issue that results in a dual to the death. The winner gets to live out the rest of Sarah’s life. With everything on the line, the original Sarah pays Trent (Paul) to train her over the next twelve months and get her ready for the battle against her double.

Dual does have a great opening featuring Theo James, that shows us what the battle looks like, but aside from a strong performance by Gillan and some interesting ideas, I had a hard time staying engaged in the narrative.  I do give Stearns credit for creating something original, even if he only partially succeeds.