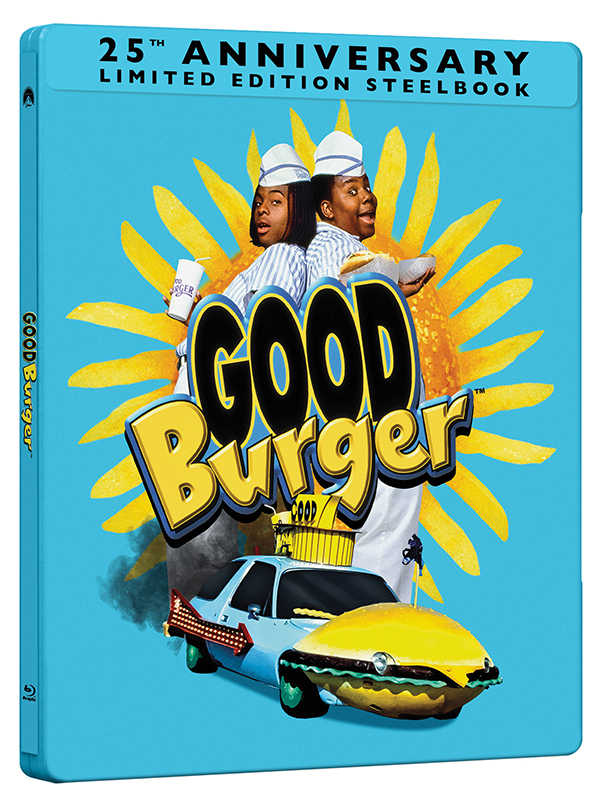 Welcome to Good Burger, home of the Good Burger. Can I take your order?  It’s amazing that those words are fondly remembered by so many who grew up with Nickelodeon’s All That sketch comedy series and the movie that eventually followed. Of course, it’s Kel Mitchell’s memorable delivery of that famous line that made viewers hungry for a burger. To celebrate the 25th anniversary of Good Burger, Paramount is releasing a limited edition steelbook Blu-ray.

In the 1997 comedy, Dexter Reed (Kenan Thompson) is all set to enjoy is summer vacation. He plans do not involve school or work of any kind. That all changes after he gets into a car accident with his teacher (Sinbad) and is forced to get a summer job to pay off the damages. While he only lasted two days at the soon-to-open Mondo Burger, Dexter quickly finds employment across the street at Good Burger. Unfortunately, that job could go away quickly if Mondo Burger owner, Kurt has his way and crushes the competition.

There is one thing that can save Good Burger though, it is the secret delicious sauce made by Good Burger employee, Ed (Kel Mitchell). It’s so good that it does succeed in bringing the customers back, and then some. While, all that Ed wants is to save Good Burger and be friends with his new co-worker, Dexter wants to take advantage of Ed and use some of those extra profits to pay off the car damage. However, the more time Ed and Dexter spend together, the more their friendship becomes real. There is also the whole plot about Mondo Burger using illegal additives to make their burgers bigger, with Dexter and Ed trying to stop them.

Good Burger is what you would expect for teen movie based on a comedy sketch series. It is a few notches below you average Saturday Night Live film adaptation, but it is harmless entertainment. While not very funny, the main characters have good chemistry, though still can’t figure out how they got Abe Vigoda in this thing. If you are a fan of the film, you may want to ad this one to your collection.