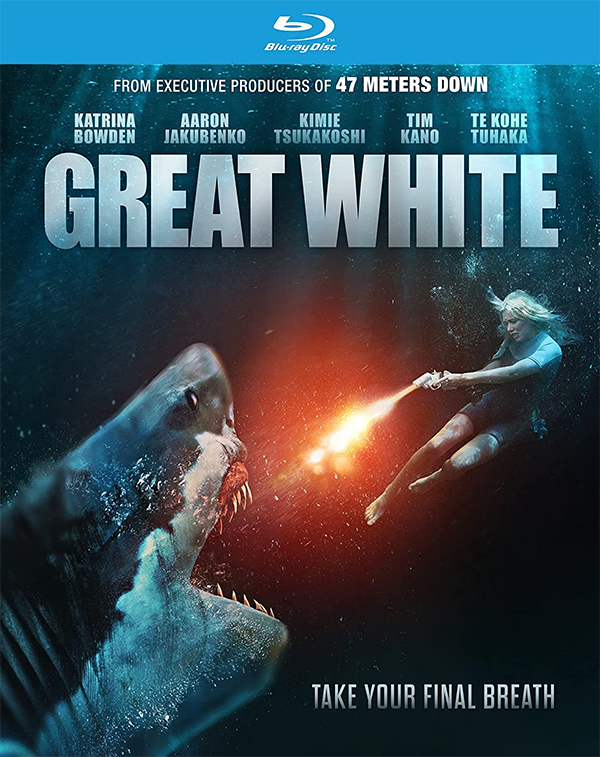 There are great killer shark movies (Jaws, Deep Blue Sea), there are bad killer shar movies (almost any made for the SyFy network) and there are the ones in between, which is where Martin Wilson’s Great White is settled. If I was to compare it to other films in the genre, I would probably rank it just below 47 Meters Down, which ironically comes from the same executive producer.

Charlie (Aaron Jakubenko) and Kaz (Katrina Bowden) have been financially strapped for awhile due to their dwindling seaplane tour business. Their aircraft is barely holding together, but it doesn’t stop the couple from taking new clients, Joji (Tim Kano) and his wife Michelle (Kimie Tsukakoshi) to a remote beach so that she can scatter her grandfather’s ashes. Along for the ride is Benny (Te Kohe Tuhaka) who is there to basically cook dinner.

Within minutes of arriving on the beach, the group stumble upon a half-eaten corpse and from the pictures they found on the phone, they believe that there may be another person stranded at sea. While searching, they do discover the victim’s boat, along with other ravaged body and that’s not all. The shark that claimed those two, is still around and it’s not done feeding. In the process of escaping the great white, Charlie loses his plane, and everyone is forced to make their way onto a life raft and that is where a majority-of-the film takes place.

The rest of Great White sees the two couples and the cook trying to paddle their way to shore. However, their biggest problem is that they are being followed by multiple sharks, that are patiently waiting for their next meal. While we wait for each attack, there is plenty of fighting going on in the raft as well between the characters. You don’t have to try too hard when it comes to guessing who will live and who will die. It is all predictable.

Great White is a standard run-of-the-mill killer shark movie that doesn’t offer anything more than 90 minutes of passable entertainment. Maybe if the CGI work here wasn’t so dreadful, I would have ranked it a little higher. When your sharks look incredibly fake, that takes some of the fun out of it.