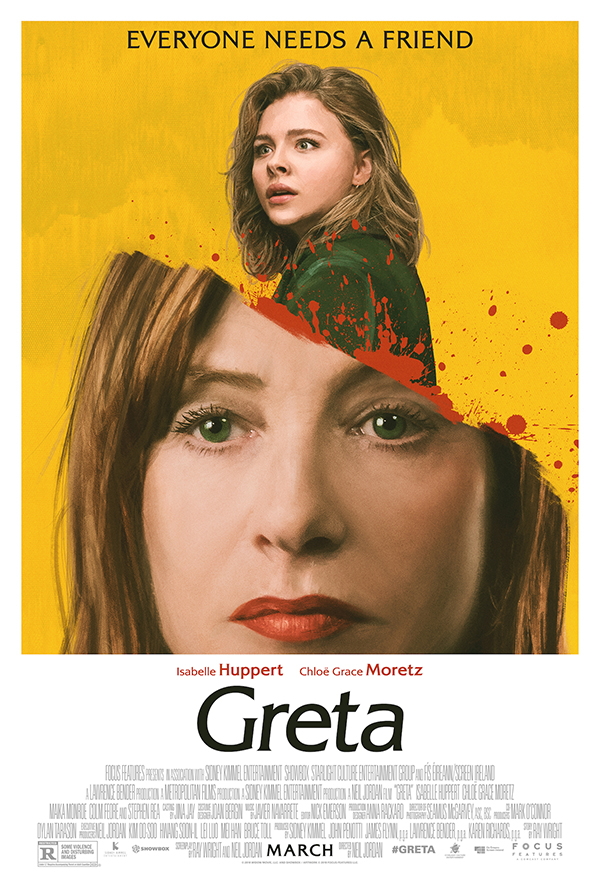 Frances (Chloë Grace Moretz) is new to New York City. The young waitress lives with her best friend Erica (Maika Monroe) in a nice apartment that Erica’s father paid for. When Frances finds a purse on the subway, she decides to return it to the owner, using the information on the I.D. inside. There we meet Greta (Isabelle Huppert), a seemingly nice older woman who shows her gratitude to Frances by inviting her in for coffee. The two of them quickly develop a friendship. With Frances losing her mother a year prior, she takes to Greta quite easily, despite Erica warning Frances not to trust her new friend.

When Frances discovers a cabinet filled with identical purses to-the-one she found on the subway, with names and phone numbers posted on the back of each one, she suddenly realizes that something is way off with Greta.  When Frances stops returning Greta’s calls and texts, things begins to get much more serious.  Not only is Greta stalking Frances at work and home, she is also setting her sights on Erica.  Of course, the police can’t do anything to stop Greta either since she is stalking mostly from a distance.

The biggest problem with “Greta” is how predictable everything is.  It takes away from the tension when you know how things are going to play out. Early on in “Greta” when Frances first meets Greta, we hear banging on the wall, while Greta dismisses it as work being done next door.  We know damn well that nobody is working next door.  There is also another scene involving a private detective (Stephen Rea). If you have ever seen the film “Misery” you know exactly how things are going to go down with his character.

Moretz is quite good here, but Huppert is terrific. “Greta” is at its’ best when it allows Huppert to let loose, otherwise it’s a merely adequate thriller that is mostly saved by Isabelle Huppert’s disturbing performance in the title role.  I just wish the cast had better material to work with. Neil Jordan’s direction is fine, but the screenplay he co-wrote with Ray Wright just doesn’t quite deliver.  I am not saying “Greta” is a film you should skip, there is plenty to like, but it may be one you will want to check out at home when it’s available on a streaming service.