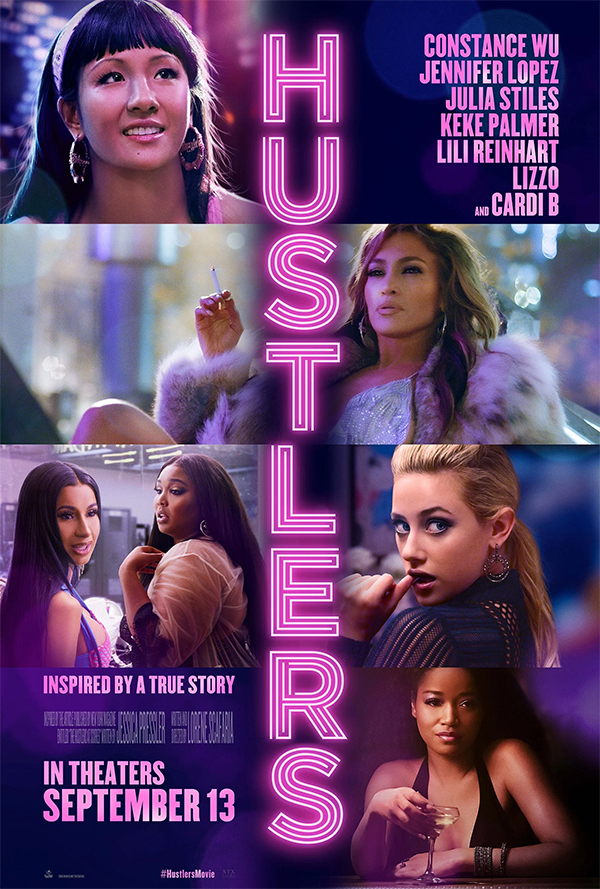 Based on New York Magazine’s 2015 article “The Hustlers at Scores”, writer/ director Lorene Scafaria’s crime-drama “Hustlers” is a much better film than the film’s marketing would lead you to believe.  Scafaria’s first screenplay, 2008’s “Nick and Norah’s Infinite Playlist” is a criminally underrated gem. Although she did not direct that film, she proved that she could write interesting characters that the audience could connect with. Although based on true events, Scafaria succeeds again with her writing. She is also a talented filmmaker, making some bold and clever choices throughout.

The story centers on Destiny (Constance Wu), a young stripper who just wants to live a life without the support of someone else. Aside from paying her bills, she gives a good chunk of her earnings to her grandmother to help her get out of debt. Although being quite attractive, Destiny hasn’t really been able to make good money dancing. That all changes when she befriends Ramona (Jennifer Lopez), who is the most popular girl at the club.  Men throw money at her until their pockets are empty. With some guidance from Ramona and fellow dancer Diamond (Cardi B), Destiny begins to earn big bucks from the club’s clientele.

Unfortunately, things changed drastically after the massive Wall Street crash of 2008 and the wall street guys that used to frequent the clubs with money to burn, stopped coming by. With Destiny and Ramona having children to care for and bills to pay, they decide to start hustling the wall street guys that hustled this country. Along with Mercedes (Keke Palmer) and Annabelle (Lili Reinhart), the women begin finding rich guys in bars, drugging them, bring them to the strip club and max out their credit cards.  They purposely look for married men who they know won’t go to the police.

The narrative is told through an interview between Destiny and a journalist (Julia Styles) so most of the film is through Destiny’s perspective. Scafaria makes some clever choices, including one involving turning off the recorder during the interview. However, the greatest asset in “Hustlers” is the cast.  I always felt Lopez was a good actor, but she is finally given a role that shows just how good she can be. “Hustlers” is at its best when focused on the sibling like relationship between Ramona and Destiny.

“Hustlers” isn’t a perfect film, but it is not as exploitative as one would think a story about strippers might be. These are strong, capable women who are quite intelligent (at least some of them are).  I have no clue if “Hustlers” will find an audience while in theaters, but I do recommend checking it out if you like the cast. You definitely won’t be hustled out of your hard earned money.