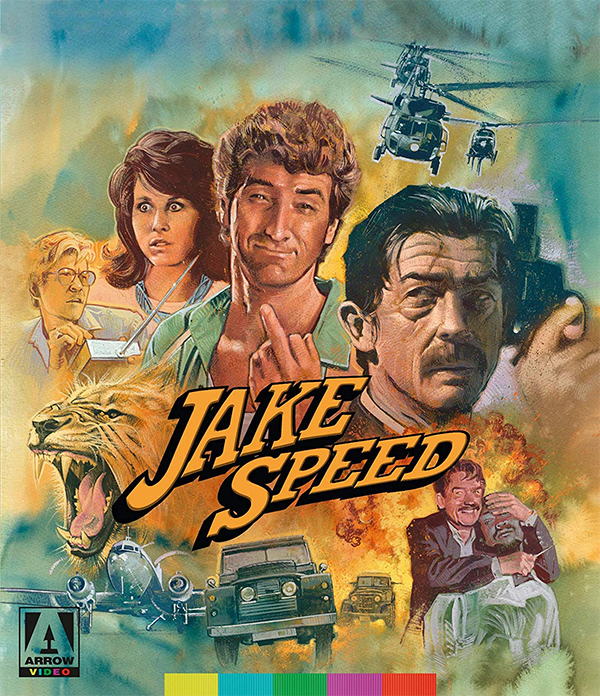 Filmmakers Andrew Lane and Wayne Crawford will forever be remembered for co-writing the 1983 teen comedy, “Valley Girl” and that is not a bad thing. That film is an 80’s classic that introduced the world to Nicolas Cage in a big way. However, three years later they tried their hand with adventure in 1986’s “Jake Speed”. This low-budget “Indiana Jones” and “Romancing the Stone” knock-off was co-written and produced by Lane and Crawford. Lane took the director’s chair, while Crawford cast himself in the title role. I remember seeing “Jake Speed” in the theater when it was released. Being a fan of the B-Grade Cannon Films that were released on nearly a weekly basis at the time, this New World Pictures adventure-comedy was right up my alley. Is the movie good? Absolutely not! However, I really loved what Crawford and Lane were attempting to do, even though they didn’t quite succeed.

For those of you unfamiliar with “Jake Speed” (and I am sure that would be most of you), the story centers on Margaret (Karen Kopins), a woman who feels responsible for her younger sister’s kidnapping during a trip to Paris. It turns out the heroic Jake Speed character in her grandfather’s favorite novels is actually, real and he offers to help Karen find and rescue her sister from sex slavers in Africa. Obviously, a film with a comedic tone shouldn’t have sex slavers as an element of the film, but this was the 80’s and so many of the successful and unsuccessful comedies during the decade were based on poor taste. One of the best things about “Jake Speed” would have to be the casting of John Hurt as the film’s villain. He is way too good of an actor to be in this film, but he does make the best with the material he has to work with.  There is plenty of action here to keep things moving along and Crawford is fine as Jake, however the attempts at humor is where “Jake Speed” mostly falls flat.

Arrow Video has delivered a brand new 2K restoration from an original 35mm print. The picture is a bit grainy at times but overall, they did a great job with the transfer. The Special Edition also includes new interviews with Andrew Lane and co-producer William Fay. If you are a fan of “Jake Speed”, you may want to include this release in your collection.