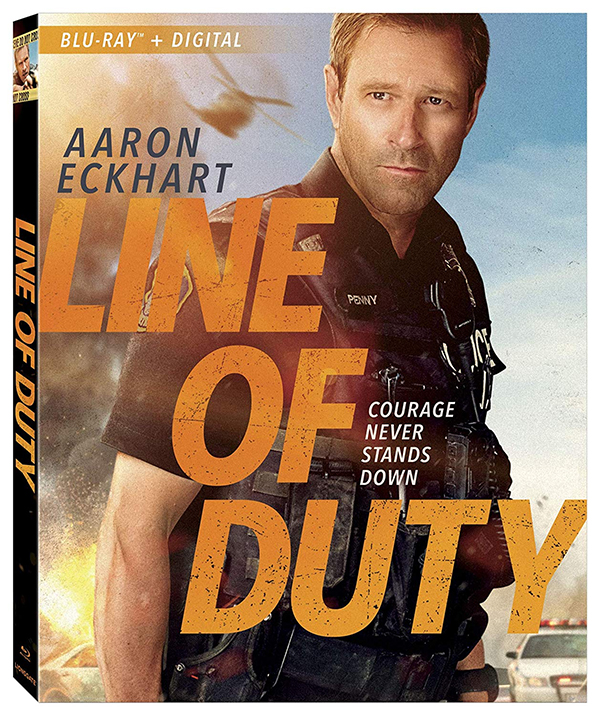 Arriving on Blu-ray and DVD this week is the Arron Eckhart led action-thriller, “Line of Duty”, directed by Steven C. Miller. Before giving us a handful of terrible low-budget action flicks starring the likes of Sylvester Stallone, Bruce Willis, Nicholas Cage and a terrible remake of “Silent Night, Deadly Night”, Miller delivered two solid indie films, “The Aggression Scale” and “Under the Bed”. The filmmaker seemed to excel more at horror than action, so I had very low expectations for his latest directorial effort. Having said that, I was pleasantly surprised, how much I enjoyed “Line of Duty”.

Within minutes of the film’s opening, we follow police officer Frank Penny (Eckhart) on an exhilarating city set foot chase, where he is in pursuit of a kidnapper. However, this isn’t just any kidnapping suspect. He is one of only two men who knows the location of police chief Volk’s (Giancarlo Esposito) 11-year-old daughter. Unfortunately, Penny kills the suspect in self-defense, which leads to his suspension. To make matters worse, the dead kidnapper’s brother Dean Keller (Ben McKenzie) wants revenge for his sibling’s death.

Frank has clues that might lead him to the girl, but Volk won’t listen, so he partners up with online reporter Ava Brooks (Courtney Eaton) who agrees to help if she can live-stream every move they make for her web channel. Yes, the story is far fetched to say the least, but it is also quite entertaining. At times, the movie feels a lot like a video game, which makes sense since writer Jeremy Drysdale also wrote the story for the game “Battlefield 2”.

“Line of Duty” is essentially a race-against-the-clock film and when done right, I love those.  Yes, this film is incredibly stupid, but it is also quite enjoyable, no small thanks to the impressive cast. My biggest gripe would be with the film’s final act which includes an action sequence taking place over a burning building. Due to the limited budget, the CGI fire and green screen used for the sequences looks absolutely, awful. I am talking Syfy channel movie bad. I wish that they would have decided to nix the fire completely or move the action to another location. Despite that issue, “Line of Duty” is quite fun worth a look.