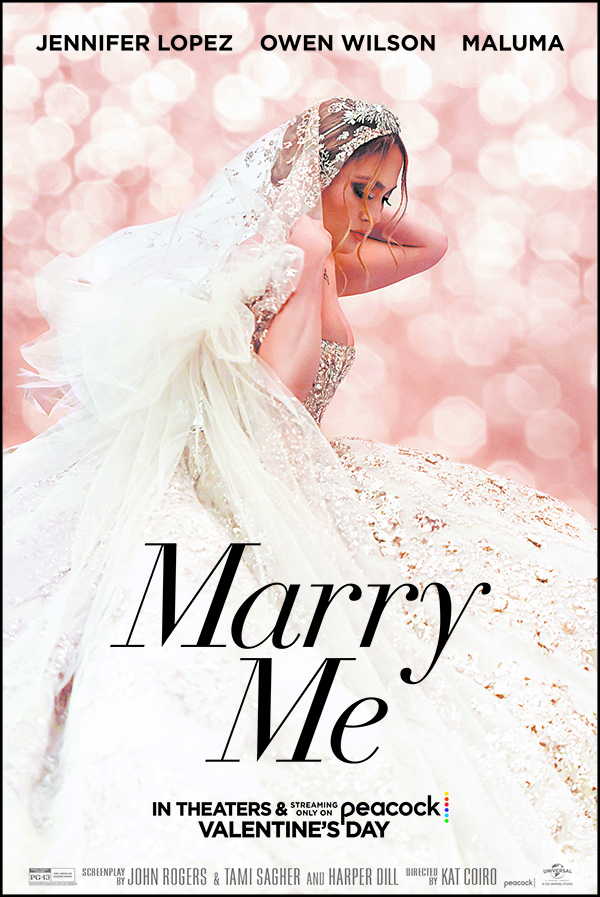 When the trailers started popping up for the new romantic-comedy starring Jennifer Lopez and Owen Wilson, I must admit that it looked all kinds of dumb. The premise is so far-fetched that I couldn’t even imagine buying into it. After screening director Kat Coiro’s Marry Me, my initial reactions to the marketing were spot on. However, I didn’t hate it. For the most part, this was a somewhat enjoyable modern fairy tale. The key ingredients are the stars themselves. Both Lopez and Wilson are adorable together and supporting players John Bradley and Sarah Silverman bring a little extra humor. I also had no clue going in that Marry Me is based on a graphic novel by Bobby Crosby. We don’t get many film adaptations of romantic-comedy graphic novels.

School teacher Charlie Gilbert (Wilson) doesn’t lead an exciting life. Aside from teaching his class, Charlie also heads the math club, which he would love his daughter Lou (Chloe Coleman) to join. Being divorced, Charlie only gets Lou three days a week, so of course he would love to spend some extra time with her in school as well.

Unfortunately, Lou doesn’t consider her father fun to be around.  That all changes after Charlie’s friend and co-worker Parker (Silverman) invites him and Lou to a concert featuring music superstar Kat Valdez (Lopez). This is a big-ticket event, where Kat would be getting married on stage to fellow pop-star Bastian (Maluma). Unfortunately, right before they tie the knot, a video goes viral of the groom-to-be having an affair with Kat’s assistant. This leads the superstar to do something unexpected on stage. She picks Charlie out of the crowd (who is holding Parker’s “Marry Me” sign) and says, yes.  You can pretty much guess what happens next.

Charlie goes along with this whole crazy idea, not for the attention, but because he is just a nice guy who saw someone in the middle of a terrible situation, and he just wanted to help. Charlie is not comfortable in the spotlight, and he is not a fan of social media.  Yet, the more time Kat and Charlie spend together, the more they begin to fall for one another.

Marry Me isn’t fresh. It never feels original in any way. Still, with Valentine’s Day, I guess there isn’t any harm in some humorous manufactured romance to go with all that drugstore Valentine’s candy out there. I also can’t believe I am saying this, but it’s nice to see a Hollywood rom-com arrives in theaters again and not straight to streaming. If Marry Me helps get some more butts in seats, I am all for it. For those not ready to venture to the multiplex, Marry Me will also be streaming on Peacock.