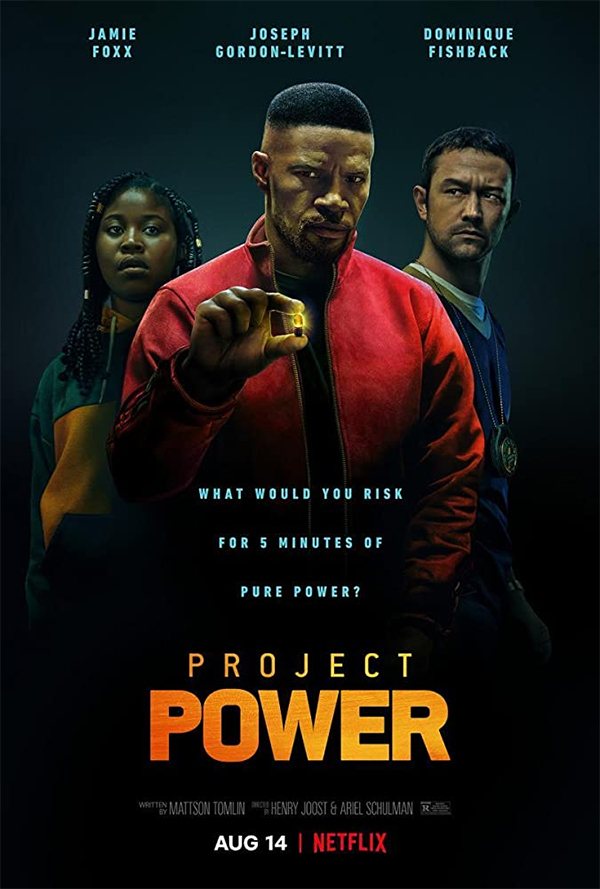 The city of New Orleans has a new problem. A drug has hit the streets that alters the users DNA for a brief amount of time, giving them a random superpower. To make matters worse, people are using their superpowers to commit violent crimes. Each user gets one power, which could either be turning themselves into a human flame, human chameleon or some other strange ability.  One of the drug pushers is Robin (Dominique Fishback), a street-smart teenager who is trying to earn enough money to pay for her mother’s healthcare. One of Robin’s customer’s is Frank (Joseph Gordon-Levitt), a local cop who uses the drug to level the playing field when going up against criminals on the special pill. For Frank, he gets bullet proof skin and augmented strength.  He also looks out for Robin, as they two have developed a sibling-like relationship.

Arriving in town around the same time the new super drug does, is Art (Jamie Foxx), a former soldier that is trying to track down the ones responsible for creating the drug. They have taken his daughter because her DNA is the key to how the drug is produced and he obviously wants her back. With the help of Robin and Frank, Art may be able to take down those who have messed with his family.

“Project Power” is definitely a gritty film, that plays out more like a crime-thriller, focused on the drug-gang underworld, with a splash of superhuman carnage and for the most part, it works. Aside from Levitt’s awful attempt at a Louisiana accent, the cast here is fun to watch and although not much happens that leaves a lasting impression, the action does move along swiftly. Directed by Henry Joost and Ariel Schulman (the duo behind “Paranormal Activity 3&4” and the underrated “Nerve”), they have indeed progressed as filmmakers.

If you are a fan of the cast and you get a kick of seeing some unlucky people explode in all its bloody glory, “Project Power” arrives on Netflix, August 14th.