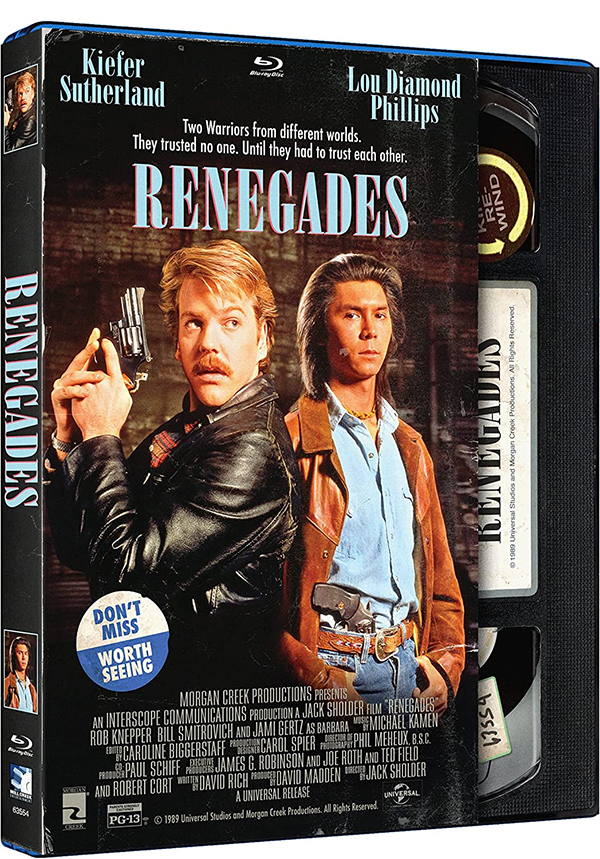 Keefer Sutherland hasn’t had the best luck with the buddy-action genre. A few years before he partnered with Woody Harrelson in The Cowboy Way, Sutherland and his Young Guns co-star Lou Diamond Phillips played a Philadelphia cop and a Native American that partner up to hunt down a gang of criminals in 1989’s Renegades. Director Jack Shoulder delivered a solid action-scifi-thriller two years prior with The Hidden. One big difference here is that this was the first screenplay from writer David Rich, which might explain why the writing is not only sloppy but also seemingly borrowed from other better films.

Undercover cop Buster McHenry (Sutherland) has been working alone on a case involving a group of criminals, led by Marino (Robert Knepper). You see, Marino is working with a mysterious dirty cop that was somehow involved with McHenry’s father who was also a cop and wound-up doing prison time. Anyone who watches films like these, should be able to figure out the cop’s identity within the first fifteen minutes. Anyways, more than taking down Marino, McHenry wants to take down the bad cop.

Meanwhile, Native American Hank Storm (Philips) has traveled from the reservation to the city with his brother and father to showcase an important tribal lance in a local museum.  During a jewel robbery escape, Marino and his crew, which include an undercover McHenry wind up in the museum, which leads to Marino shooting and killing Hank’s bother and stealing the lance. Well, that is one way to bring Buster and Hank together. With Marino now aware that McHenry is a cop, he must reluctantly work with Storm to track down the dangerous criminal, take him down, and retrieve the lance.

While Sutherland’s and Philips chemistry in the Young Guns films felt natural, the same can’t be said about their work in Renegades. Philips looks bored and Sutherland looks like he is trying to hard to be a loose cannon cop. Together their partnership comes off as uneven and lacks anything that feels remotely genuine. Sutherland’s The Lost Boys co-star Jami Gertz is given a thankless role that feels like it was written as an afterthought.

While Renegades isn’t terrible, it isn’t memorable either. If you want to see Philips playing a cop in a horror movie, I recommend The First Power which came out the following year. However, if you are a fan of long and well shot car chases, Renegades does deliver a solid one.