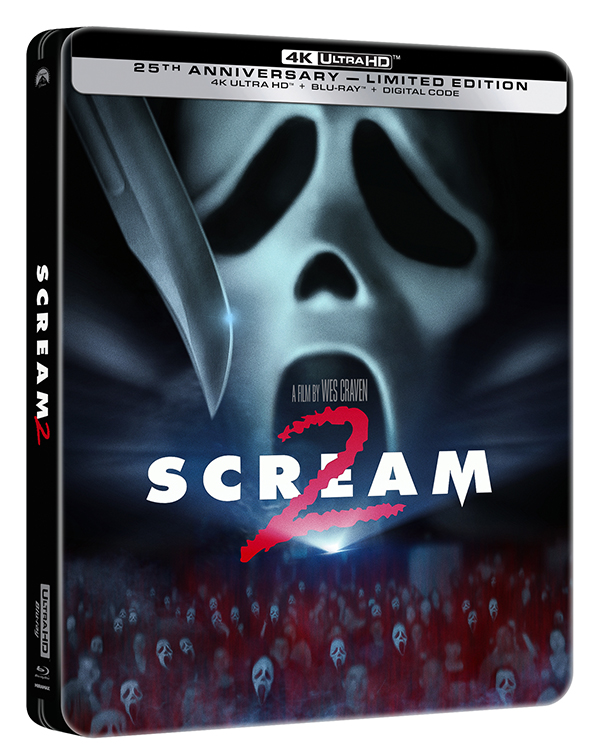 For its’ 25th anniversary, Paramount is releasing 1997’s Scream 2 on 4K UHD. While Wes Craven’s original film is a horror classic, his second film in the ongoing franchise remains the best sequel to date. The humor is just as razor-sharp, and the kills leave a lasting impact. Ghostface is even much more menacing this time around. Craven and Williamson knew that sequels were generally inferior films and they had fun working that piece of knowledge into the story. It’s amazing Scream 2 turned out as well as it did, considering the script leaked online in the middle of production revealing the identity of the killers. This forced Williamson and Craven to make several changes in the script. Not even the cast members knew how their character’s stories would unfold.

One of the greatest things about Scream 2 is the opening sequence featuring Omar Epps and Jada Pinkett as two college students that get done-in by Ghostface during a packed preview screening of the movie Stab, which was based on the events of the first Scream movie. It’s a killer opening that nearly rivals the Drew Barrymore opening of the first film. There is just so much energy in the whole sequence. I wish I could attend a screening like that (minus the murder).

Sidney Prescott (Neve Campbell) is now in college and has tried to move on from the events that took place in Woodsboro. Ghostface survivor Randy Meeks (Jamie Kennedy) is also attending Windsor College with Sidney and she takes some comfort knowing that there is someone there with her who understands the trauma she went though. Like Sidney, Randy just wants to move on and distance himself from the experience. It doesn’t help when they learn a Ghostface copycat has arrived on campus and it apparently trying to make his/her own real-life sequel.

The news of the Ghostface copycat brings reporter Gale Weathers (Courtney Cox) back into Sidney’s life and the college freshman is not too thrilled about the new Stab movie which was inspired by Gale’s book. To make matters worse, Gale surprises Sidney with an unwanted face-to-face with Cotton Weary (Live Schreiber), the innocent man she had sent to prison for a year, accusing him of murdering her mother. He was eventually released from prison when it was revealed that the killers from the first film framed him. Dewey Riley (David Arquette) even returns to check on Sidney and get to the bottom of the killings.

While the supporting cast is not as memorable as that of the first film, the inclusion of a young Timothy Olyphant as Mickey was definitely a major plus. It was also fun to see Joshua Jackson, Rebecca Gayheart and Sarah Michelle Gellar pop up. Elise Neal as Sidney’s closest college friend Hallie was also a very likable character. It was a shame to see some of these get taken out in brutal fashion by Ghostface, but that’s the point of these films. Got to build the body count.

The new 2160p Dolby Vision presentation is stunning. Everything looks crystal clear and finely detailed. While last year’s 4K release of Scream looked great, this one looks even better. Much of that also has to do with cinematography and locations in the sequel. The university setting with the rich design comes across helping the film look like a much grander production. The details of the campus really come to life.

For the audio, the DTS-HD Audio 5.1 has been ported over from the 2011 Blu-ray release which is more than fine.  An upgrade to Dolby Atmos for a slasher film like Scream 2 may have been nice, but definitely not necessary. The 5.1 audio gets the job done. As for bonus content, nothing new has been added. We are given the same legacy content that was released on the Blu-ray.  While the only thing upgraded here is the video presentation, it is a vast improvement over the 1080p release from over a decade ago and I highly recommend grabbing this if you are a fan.