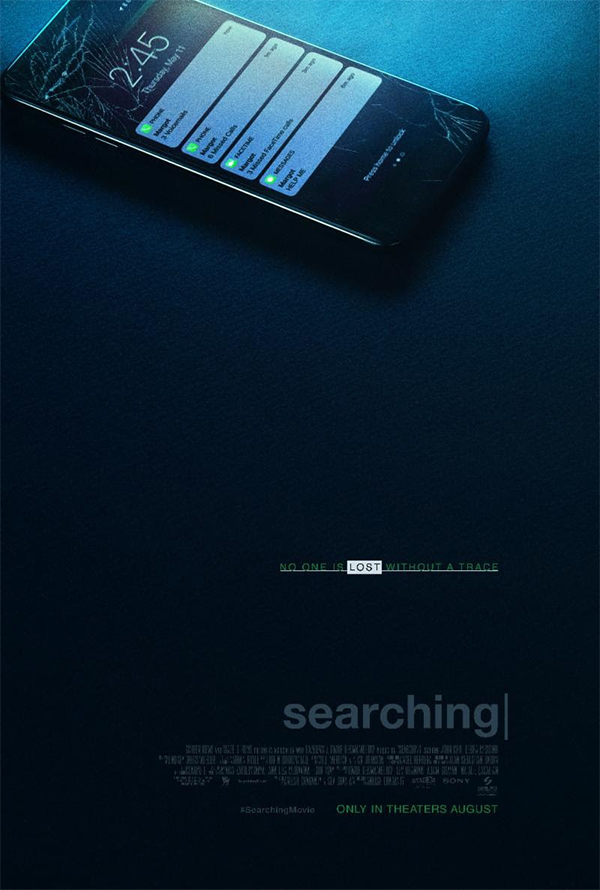 I can’t say I was clamoring for another film set entirely online. After two “Unfriended” films, I was already quite sick of the storytelling format.  To say I had low expectations for “Searching” is an understatement. Former Google employee, Aneesh Chaganty makes his feature film directorial debut and he knows exactly how to make a google based narrative work surprisingly well.  He has delivered a suspenseful, emotional and perfectly paced dramatic thriller that could be one of the best I have seen in quite some time. “Searching” feels like one of those entertaining 90’s thrillers set today’s hi-tech world.  That is a good thing.

“Searching” opens on a montage of video footage focusing on the Kim family. David (John Cho), his wife Pamela (Sara Sohn) and their daughter Margo (at various ages). This footage gives us a good idea about who the family is, which is important because it allows the audience to get invested in them.  We also learn from the start that Margo (Michelle La) loses her mom at a young age.

The difficult thing about reviewing a film like “Searching” is that it is essentially a 100-minute investigation and the more I tell you about the developments the more I risk taking away some of the suspense the story offers.  I rather focus on the other elements that make the film work so well.  First off, there is Chananty, who also co-wrote the project. This guy knows how to grab the audience and hold their attention. He also knows how to use today’s technology to serve the story in a grounded and believable way.  Almost everything he has the characters doing feels true to life.

The casting of John Cho is also a huge asset. The actor initially turned down the role but after a meeting with Chananty, he changed his mind.  I am guessing the filmmaker knew exactly how to sell the idea to Cho.  Thankfully it worked.  Cho who is known more for his more comedic roles in films like “Harold and Kumar”, “American Pie” and even in “Star Trek”, proves to be a gifted dramatic actor as well.  He plays a man who is terrified and struggling to find out what happened to his daughter. He spends most of the film in front of a computer screen or mobile device.  The pairing of Chananty and Cho is electric.

“Searching” isn’t perfect. One of my main issues was with the final act. I had trouble buying into how the events played out. I am curious if Chananty will continue to use this format to tell more stories or move to a more traditional narrative. Only time will tell, but I look forward to seeing what he gives us next.