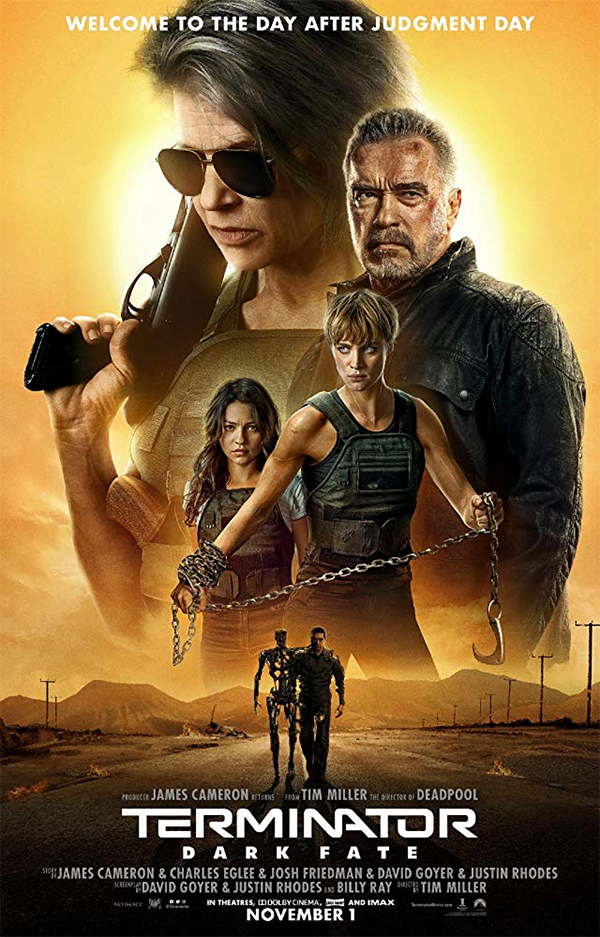 There have been three other attempts to move the Terminator franchise forward after the hugely successful “Terminator 2: Judgement Day”. We had the mildly entertaining “Terminator 3”, the post-apocalyptic “Terminator: Salvation” and the hot-mess of a reboot, “Terminator: Genisys”. One of the most notable differences between the first two films and those others were that James Cameron wasn’t involved with any of the post-T2 films. Tim Miller (Deadpool) is at the helm of “Terminator: Dark Fate” which wisely ignores every film after “T2” and serves as a direct sequel. Much like how last year’s “Halloween” film ignored all-of-the sequels and reboots. Although James Cameron is back in a limited capacity, his involvement is clearly shown throughout the film. To fully enjoy “Terminator: Dark Fate” it is best to go in knowing that it will not be as good as the first two films, but it does put the series back on track and makes everything a whole lot less complicated to follow.

A question that has been on the minds of the die-hard “Terminator” fans is answered in the film’s opening minutes and I am not going to get into that, but moving forward, the new hero of the story is a young Mexican girl named Dani Ramos (Natalia Reyes). She has become the target of a new model terminator, Rev-9 (Gabriel Luna). Much like T2’s T-1000, the Rev-9 and take the form of any person it comes in-contact-with and can regenerate as well. One new feature is that it can split itself into two terminators. This makes fighting the Rev-9 even more difficult.

Sent from the future to protect Dani is an augmented human soldier named Grace (Mackenzie Davis). She has super strength and can put up a fight, however when she uses her energy implant too much, she must inject herself with a series of medications or she is unable to function. Fighting the Rev-9 does take its toll. Thankfully, they are not alone. In comes the return of Sarah Connor (Linda Hamilton). She may be nearly three decades older than the last time we saw her, but she is the same bad-ass, just a bit more jaded (and we can’t blame her).

Although Sarah and Grace don’t trust or like each other, they both want to protect Grace, even though it isn’t clear to the audience why Dani is so important to future of humanity. We learn that as the story progresses. As you are probably aware, Arnold Schwarzenegger is back as the T-800 model and he has been living a domestic life with a wife. He has helped raise her son. He is also carpenter, who goes by the name Carl.  Sure, it sounds stupid, but it makes a whole lot more sense then you might think. Again, I don’t want to give away too much detail on motivations, but Carl offers to help protect Dani, even though Sarah doesn’t trust him.

“Terminator: Dark Fate” brings the franchise back to basics and leaves most of that time travel mumbo jumbo out. The simplicity is key. The first two films were not overly complex and they worked wonderfully.  Unfortunately having a string of bad sequels and reboots in recent years still had an impact with “Dark Fate”. Fans of the original films like myself had trouble mustering excitement for a new “Terminator” film after being let down so many times. Although “Dark Fate” is flawed, it still manages to be a great deal of fun and the cast puts their all into the characters. Davis, Reyes and Hamilton are a great trio and can hold their own. It is always great to see Schwarzenegger, but aside from the domestic addition, there isn’t a whole lot new with him.

I believe it was a smart move for the studio to release “Terminator: Dark Fate” at the start of November and will most likely have a strong opening weekend before dealing with the release of “Doctor Sleep” next week. If you are afraid of getting burned by another bad “Terminator” film, don’t be, this one is a huge step in the right direction.