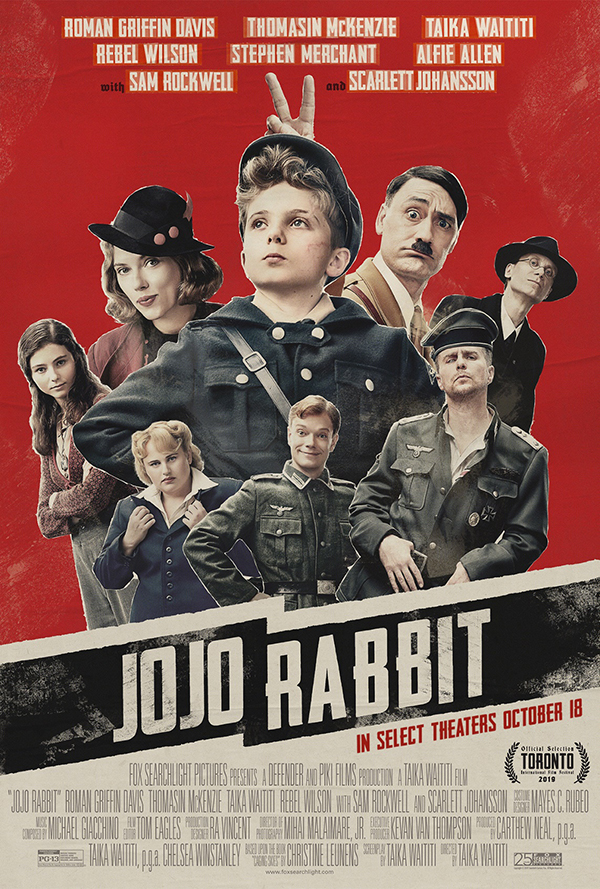 In between his “Thor” films for Marvel, writer/director Taika Waititi has used that time to craft one of the most unique and brazen films set during World War II that I have ever seen. It is one thing to make a comedy in which Hitler is a running joke (much like “The Producers”), it is something else completely to tow the line between comedy and drama in a story set in Nazi Germany, where the horrors of that time were all-too-real. There was nothing remotely funny about WWII, yet Waititi’s adaptation of Christine Leunens’s novel “Caging Skies” is not only funny, but beautiful, powerful and surprisingly touching.

10-year-old Jojo (Roman Griffin Davis) wants to be a Nazi. His dream is to one day mean Adolf Hitler and become best friends. For now, he settles with his imaginary friend Adolf (Waititi). After Jojo accidentally blows himself up with a grenade at the Hitler Youth training camp (Like a really messed up version of the boys & girls scouts), he starts working at the local office, hanging up propaganda around the town. His boss, Captain Klenzendorf (played hilariously by Sam Rockwell) looks after Jojo since his mother Rosie (Scarlett Johansson) insisted.

Jojo believes all Jews are evil monsters that must be eliminated, even though he didn’t know any Jewish people. That all changes when he investigates a noise coming from his deceased sister’s bedroom. That is when he discovers Elsa (Thomasin McKenzie) living within the bedroom wall. It turns out the teenage Jewish girl was a former classmate of Jojo’s sister and Rosie has been hiding her. Jojo wants to turn her over to the Gestapo, but he is afraid that his mother would be punished for aiding Elsa. Instead, he agrees to keep quiet if Elsa tells him everything he wants to know about the Jewish people for a book he wants to write. Of course, we know that Jojo is eventually going to have a change of heart and will come to realize that he doesn’t want to be a Nazi, but he is going to have to deal with some serious pain before his eyes are completely opened. That is where “Jojo Rabbit” could have gotten dicey if not handled in such a masterful way.

Waititi gives us much of the humor early on but doesn’t try to pile it on when the story is focusing on the relationship between Jojo, his mother and Elsa. He uses the humor sparingly and that was a wise move. That doesn’t mean that “Jojo Rabbit” won’t offend some. I have a feeling an older generation who was far less removed from WWII may find the film to be a little too hard to stomach and that is completely understandable, no matter what the filmmaker’s intentions were. It-is-clear that Waititi is commenting on the parallels between 1940’s Germany and the world we live in today. Although so much has changed, there is quite-a-bit that has stayed the same.

“Jojo Rabbit” is one of the best films of the fall season and features a strong supporting cast, most notably, Archie Yates who is a scene stealer as Jojo’s friend Yorki. There was one great moment in the final act involving Yorki and a rocket launcher that completely cracked me up.  This may be the Halloween season, but I highly recommend you check out “Jojo Rabbit” while it’s in theaters.