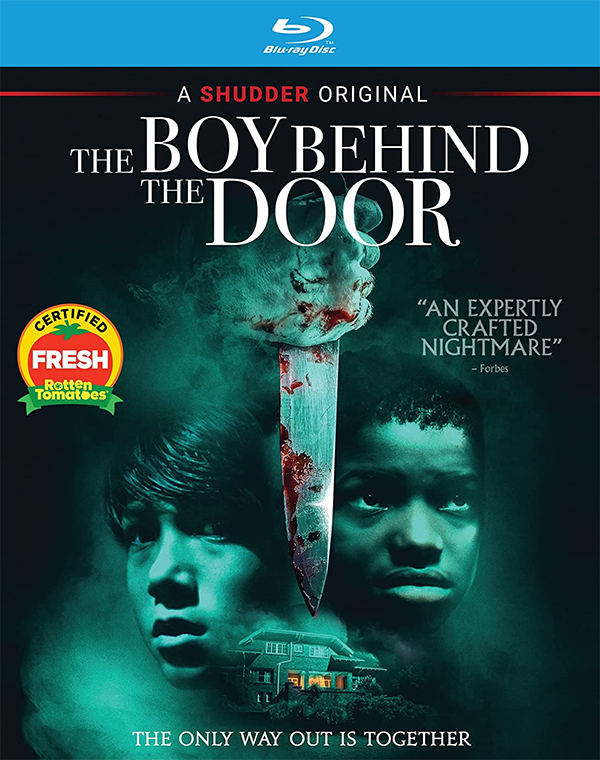 The feature film debut from writer/directors David Charbonier and Justin Powell arrives on Blu-ray next week. Originally premiering in the fall of 2020 before being released in the summer of 2021, The Boy Behind the Door took a little while to finally be available on physical media. This was a first-time viewing for me, and I must say that I was incredibly impressed with all involved, both behind and in front of the camera.

Bobby (Lonnie Chavis) and his best friend Kevin (Ezra Dewey) are enjoying a nice day playing catch outside. When their ball rolls down a hill, Kevin runs down after it, but doesn’t return.  When Bobby goes looking for his friend, he is knocked unconscious by someone, only to wake up in the trunk of a car. Bobby does kick his way out of the trunk but before he is able to run for help, he hears the screams of Kevin coming from inside the isolated home. Most kids might run away, but Bobby decides to make his way into the home and try to save Kevin.

Though we don’t get to see the identity of the kidnapper until later on in the film, there is another threat inside the house. A creepy man (Micah Hauptman) paid the homeowner/kidnapper a stack of cash to have his way with Kevin and Bobby has to figure out a way to free his friend, while not getting caught by the creep. There is also the problem of the kidnapper coming back home as well. While Bobby does let Kevin know that he is in the house through the vents, it becomes increasingly tricky for him to avoid being discovered. Even figuring a way to call the police doesn’t go easily. As the story moves along, both boys find themselves feeling more hopeless, but that doesn’t stop Bobby from trying everything to rescue Kevin.

Charbonier and Powell have both crafted and incredibly intense and and high-tension horror-thriller that is even more terrifying because the victims here are children. Both Chavis and Dewey give strong performances, but it is Chavis who essentially carries the whole film on his shoulders. This isn’t simply a movie about kids tying to outsmart a monster or slasher. The villains here are all-too-real and both played very convincingly. The Boy Behind the Door absolutely delivers on a minimal budget and the filmmakers make the most with the limited space they are working with. There are also some great moments that are clearly influenced by well known horror films.  The bathroom door sequence is a great homage to The Shining. Now I want to finally watch the filmmaker’s 2021 sophomore feature, The Djinn.