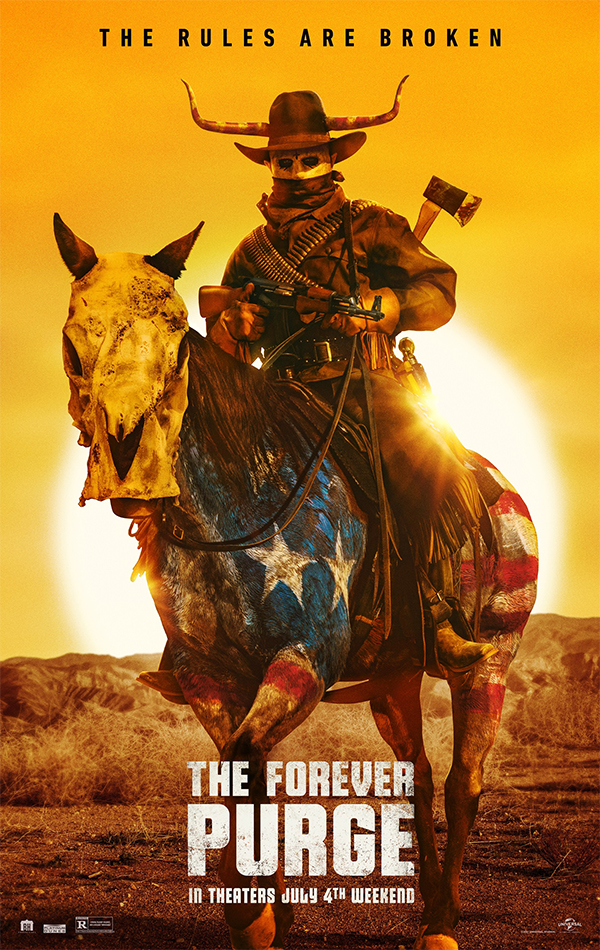 The Purge franchise has had its’ ups and downs (mostly downs). The first film failed to deliver on the promise of an all-out purge by keeping things mostly in a single home. The second film was easily the most entertaining, giving us what we missed in the first film. The two installments that followed offered nearly nothing new, while the latest film, The Forever Purge does manage to expand the story to mixed results. While this might be the second-best Purge film, its’ political message is not only heavy handed, but also a bit confusing at times.

The rules of the one-night annual purge have broken down. An uprising of white supremacists are determined to cleanse their nation of anyone that doesn’t share their skin color and they aren’t letting the daybreak purge sirens end the violence. Instead, lawless marauders believe the purge should be never-ending. The NFA which is the government program that started the annual purge is powerless to stop what they started.

In the middle of the craziness, are two families. There is the rich and Caucasian Dylan (Josh Lucas) and his wife Emma (Cassidy Freeman) and Dylan’s father’s employee Juan (Tenoch Hauerta) and his wife Adela (Ana de la Reguera). Dylan has some deep-rooted issues when it comes to the Mexicans that work for his family. However, the extended breakout of violence forces both couples to work together in-order-to survive. Caleb has a change of heart when Juan saves the lives of him and his family, early on in the film.

Where The Forever Purge works is in its’ new setting. This gives the film a more unique feel that makes it stand out from the previous film. Unfortunately, they do head into the city mid-way through. Thankfully, the final act brings things more out in the open.  Where the film doesn’t work so well is in not only its’ repetitiveness and lack-of-originality, but also in the message writer James DeMonaco is trying to get across. Obviously, he is aware that the whole idea of the purge is not a good one, but the political and racial elements at times feel muddled, or that could just be me not fully grasping onto the idea behind the films. Either way, if you are a fan of the series, I have a feeling this one won’t disappoint you.