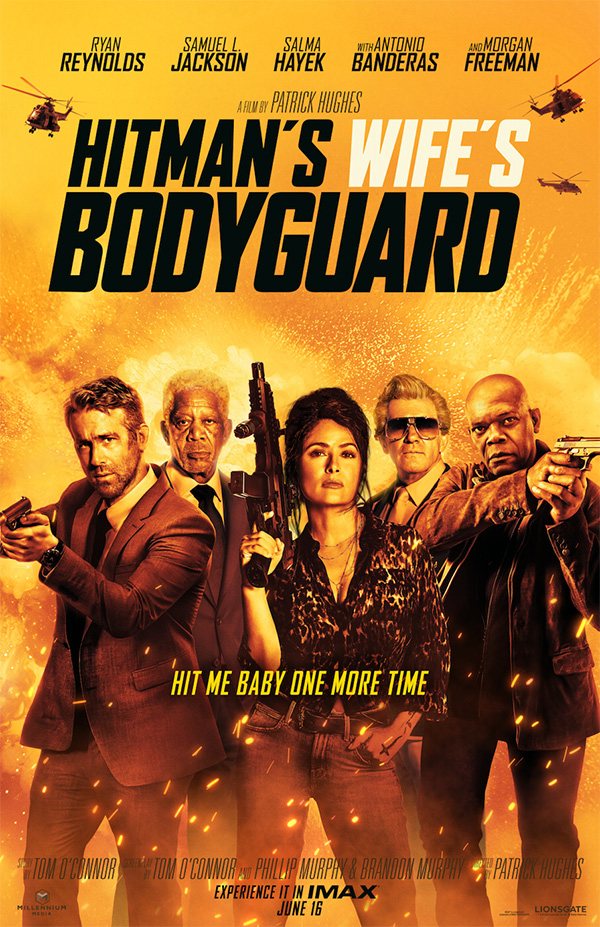 I guess you can say 2017’s The Hitman’s Bodyguard was a box office success, grossing $180+ million worldwide on budget somewhere under $70 million. When it comes to its’ stars Ryan Reynolds and Samuel L. Jackson, those are nowhere near the type of numbers their Marvel characters tend to bring in. Still, it made a profit, even if it didn’t leave a long-lasting impression on moviegoers. As for Hollywood, if a film makes enough of a profit, then a sequel will find its way into production. That’s brings us to The Hitman’s Wife’s Bodyguard, a film so braindead in every single way imaginable, that I can’t believe production wasn’t halted to figure out a way to either make the jokes funny or at least make the action sequences exciting. Just how awful is this film? Well, let me put it this way, I would have rather rewatched Reynolds in R.I.P.D. or Green Lantern again and Samuel L. Jackson in The Spirit (OK, Maybe I won’t go that far).

Director Patrick Hughes once again churns out a bad sequel (He was also responsible for The Expendables 3) and both Reynolds and Jackson are back as former bodyguard Michael Bryce and the hitman that ruined his life, Darius Kincaid. This time around Salma Hayek has been given a much larger role as Darius’ wife Sonia, who is even more trigger happy and insane than her husband. Sadly, they dragged in Morgan Freeman and Antonio Banderas to take part in this poor excuse of an action-comedy.

The story opens with Michael taking a sabbatical on the advice of this therapist. No bodyguarding for him, which shouldn’t be an issue since he is lost his bodyguarding license after the events of the first film. Michael is just about to settle in on the beach and read a book while working on his tan, when his relaxation is interrupted by a blaze of gunfire. Sonia has located Michael and she convinces him to help rescue her husband who has been abducted. The rescue happens pretty quickly, but that leads to a turn-of-events that gets them captured by the government. Now the three of them must work together to stop a powerful madman (Banderas) from killing millions of people with his evil plan, in-order-to earn their freedom.

The Hitman’s Wife’s Bodyguard writing is so lazy, that an excruciating amount of profanity is spewed out just to try and get some laughs. Well, it doesn’t work, not once! Reynolds is naturally funny, but here he is stuck in one note and he can’t deliver a single laugh. I am glad Hayek’s character has been promoted to one of the leads, but she is stuck in the same position as her two co-stars. There is nothing in the script to work with. I will admit the last line she had before the end credits was funny, but that was it. This sequel feels about as purposeless as The Whole 10 Yards and about as random as well.

Even the action sequences are poorly staged and shot, delivering no excitement whatsoever. It probably would have been smarter to dump this turkey on a streaming service during the height of the pandemic because I would hate to see someone return to the movies for the first time in nearly two years for this cinematic abomination. The stars and audience deserve better.