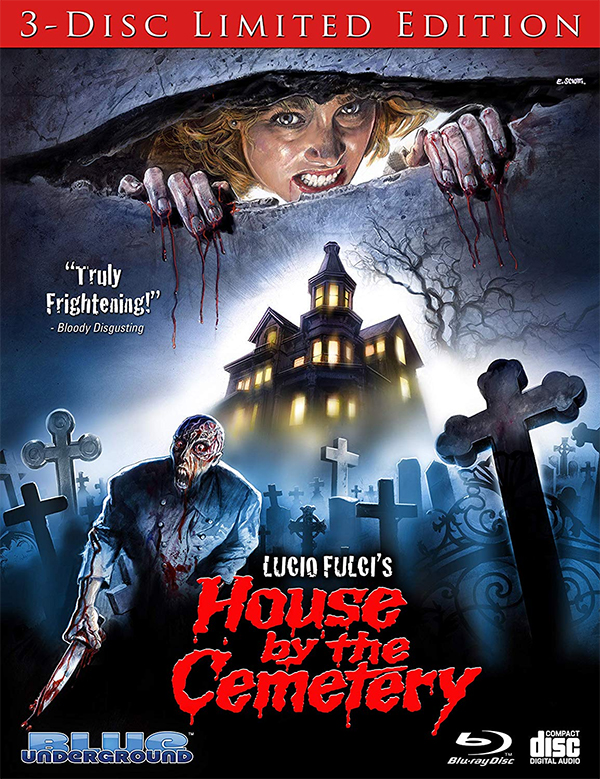 Arriving on Limited Edition Blu-ray this week is Lucio Fulci’s Italian horror film, “The House by the Cemetery”.  Blue Underground released this title on Blu-ray back in 2011 but the brand new 4K transfer is a huge improvement in almost every way.  Granted, out of the numerous Fulci films I have seen, “The House by the Cemetery” is not one of my favorites. However, much like with last year’s 4K remaster of “The New York Ripper”, Blue Underground has put forth much effort in making sure this release would please fans.

For those unfamiliar with “The House by the Cemetery”, the story centers on the Boyle family, who move into a a small town, New England home with a terrifying secret. The previous owner was a deranged doctor that supposedly committed suicide. That didn’t stop his former colleague, Dr. Norman Boyle (Paolo Malco) and his wife Lucy (Catriona MacColl) from moving in with their son Bob (Giovanni Frezza). Of course, it didn’t help that their real estate agent did her best to keep as many details as she cool away from her clients. Yep, there is something evil living in the house and pick’s off a few of its visitors.

“The House by the Cemetery” includes an English 5.1 and 1.0 DTS-HD, as well as Italian 1.0 DTS-HD. Despite the poor dubbing, my preference remains the English track. As I mentioned before, the new 4K restoration, which was taken from an uncut 35mm negative looks fantastic. There is a new audio commentary with “Splintered Visions” author Troy Howarth, as-well-as a new interview with co-writer Giorgio Mariuzzo and more. The 3-disk set also includes the original motion picture soundtrack by Walter Rizzati. One of my favorite inclusions in almost any special release would be the collector’s book and “The House by the Cemetery” includes one that features an essay by Michael Gringold (Rue Morgue). If you are a fan of the film or the filmmaker, you may want to ad this release to your collection.