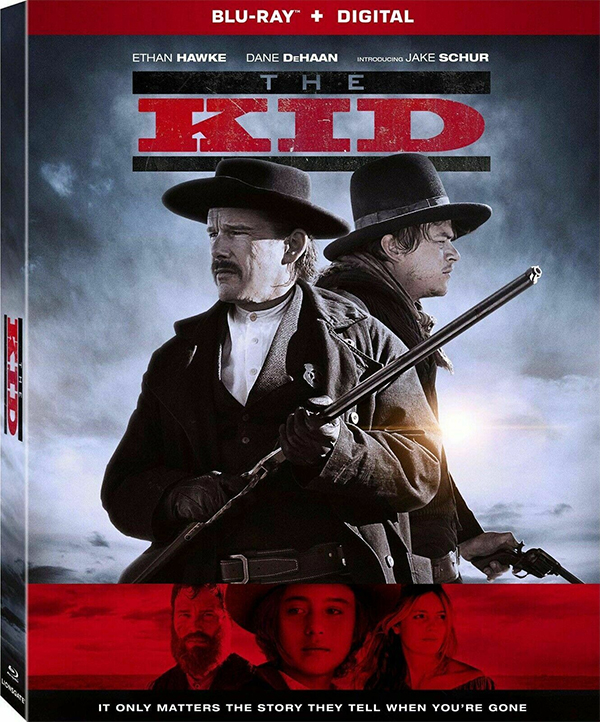 Arriving this week on Blu-ray is Vincent D’Onofrio’s western, “The Kid”, starring Ethan Hawke, Dane DeHaan, Chris Pratt and Jake Schur. There have been numerous films told about the outlaw, Billy the Kid, one of my favorites would have to be “Young Guns”.  What set’s “The Kid” apart from the rest is that the story isn’t centered on Billy, but rather a young boy who crosses paths with him and winds up being part of his story.

Rio (Schur) and his older sister Sara (Leila George) go on the run after they kill their father in self-defense. Their uncle Grant (Pratt) wants to catch his niece and nephew so he can take revenge. Grant does get a hold of Sara, leaving Rio to fend for himself.  Determined to rescue his sister, Rio makes his way across the south west, where he finds himself in the middle of a confrontation between Billy the Kid (DeHaan) and Sheriff Pat Garrett (Hawke). If you are familiar with those two individuals, then I don’t need to get into their backstory.

I have never been a huge fan of westerns, but once-in-awhile, one comes along that does grab me.  Although “The Kid” isn’t a great film, it does do something interesting with a story we are already familiar with. What sells the film Is the cast. If you like Hawke and DeHaan, I have a feeling you will like them here. Pratt’s role is minor, but he is nearly unrecognizable here and does a good job playing a repellant human being. If you like westerns, I say give this one a look.