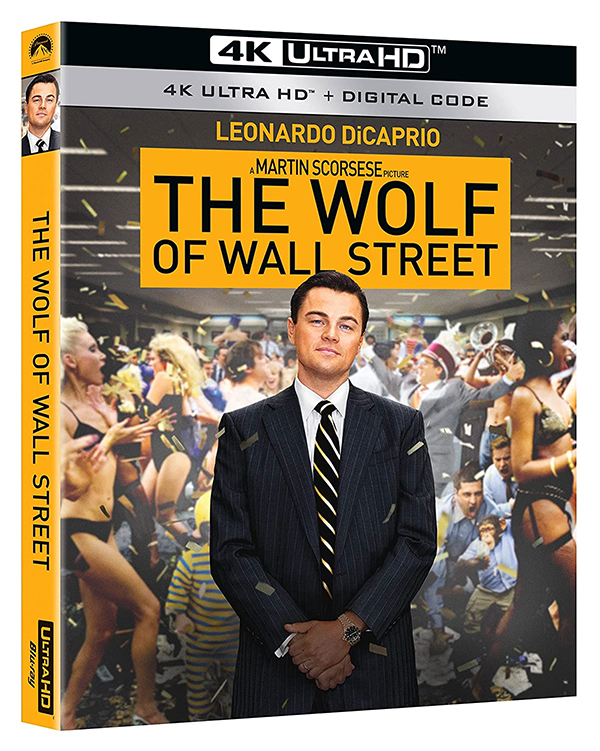 Arriving this week on 4K UHD is Martin Scorsese’s The Wolf of Wall Street. Below is my 2013 review of the film for its’ theatrical release.

I already know that I am going to take a whole lot of flak for this review from people who absolutely love Martin Scorsese’s The Wolf of Wall Street. Normally a film’s runtime would not play a huge part on my feelings towards it but the 180 minutes (3 hours) I feel are not justified.  I am pretty sure if at least 30 minutes were shaved off, the latest Scorsese/ DiCaprio team-up would have made my 10 best of the year list.  I wanted to love The Wolf of Wall Street and there is so much great stuff in there, but it just goes on for way too long and because of that it had me lose interest off and on.

The Wolf of Wall Street is based on the true story of New York stockbroker Jordan Belfort (played wonderfully by Leonardo DiCaprio) who built his fortune by defrauding investors.  Belfort didn’t work alone. His partner Donnie Azoff (Jonah Hill) along with Belfort’s band of brokers who were trained by a script that Belfort comprised made so much money that they had to invent ways to spend it all.  This included hiring little people to throw at a velcro target, bringing marching bands into the office, along with daily visits by prostitutes for the brokers.

I absolutely loved DiCaprio here and I don’t think I have ever seen the actor have so much fun with a role.  There is one scene which involves “lemons” (expired drugs) that has to be one of the funniest sequences of the year.  DiCaprio shows us in that sequence that he is capable of pulling off physical comedy.  Jonah Hill’s performance is also unlike anything I have seen before from the comedic actor.  Azoff was a strange individual and Hill definitely delivers the strange.

The Wolf of Wall Street is quite excessive especially when dealing with Belfort’s drugs, sex, parties.  Don’t get me wrong, there are some great moments in those scenes, but they could have been trimmed down.  If the film had to be 3 hours, I would have liked to see more time spent with Agent Patrick Denham (Kyle Chandler), who has been working on taking down the criminal broker.  We hardly get any time with the investigation.

The Wolf of Wall Street is quite good, but it just isn’t great.  Scorsese to me is still one of the best filmmakers working today and I do like that he is trying things a big different. I loved his first family film “Hugo” and unlike the director’s previous works, this is more of a comedy above anything. As a comedy so much of it works, but almost all comedies can wear out their welcome if they run on too long.  This one is no exception.

The new 4K transfer has been approved by Scorsese and is presented in Dolby Vision which is a noticeable upgrade from the Blu-ray. The locations absolutely pop with this release. Wall Street, to the beach house and other luxurious locations in which the characters spend time, everything looks crystal clear. Cinematographer Rodrigo Prieto’s world of indulgence is given proper justice. Although we are given Dolby Vision, there is no Dolby Atmos sound, which in all honesty, is no big loss. The Blu-ray’s 5.1 lossless which was brought over from the previous Blu-ray is perfectly acceptable as this is more of a comedy. The bonus features are also ported over from the Blu-ray. If you are a fan of The Wolf of Wall Street, and want the best presentation of the film, I recommend grabbing this release.