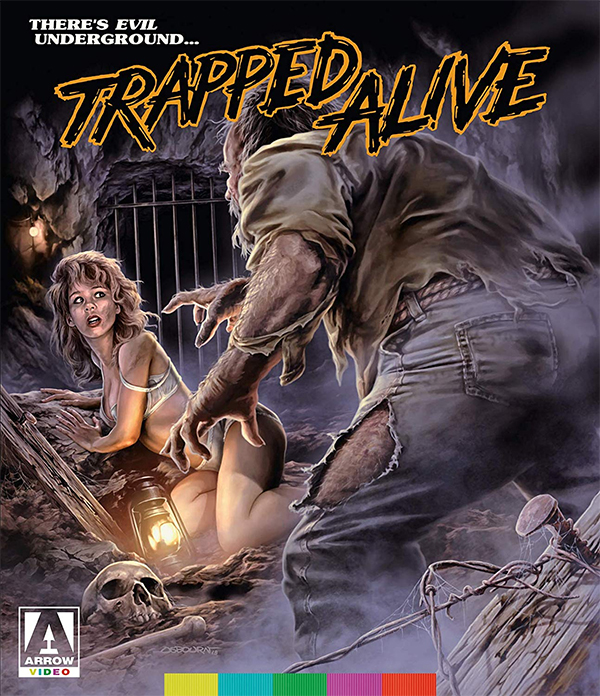 Available now on Special Edition Blu-ray is Leszek Burzynski’s horror film, “Trapped Alive”, courtesy of Arrow Video.  Shot in the 80’s but released in the 90’s, I remember renting this one at my local video store multiple times. Fan’s of “Trapped Alive” should be pleased with the new 2K restoration and all the new commentaries that this release is packed with.  The most notable addition would be the making-of documentary, “There’s EVIL Underground”.

Genre regular Cameron Mitchell (The Toolbox Murders, From a Whisper to a Scream) stars in this thrilling tale of escaped hoodlums and underground-dwelling cannibals from director Leszek Burzynski and Hellraiser producer Christopher Webster. One wintry night, pals Robin and Monica are making their way to a Christmas party when they’re carjacked by a gang of crooks recently escaped from the local penitentiary. With the two young women taken as hostages, things take an even darker turn when their vehicle plummets down an abandoned mine shaft, trapping them underground with the dangerous crooks – and a mutant cannibal. Filmed in 1988 under the title of Forever Mine but not released until 1993, Trapped Alive was the first film to come out of Wisconsin’s now-defunct Windsor Lake Studios, which would go on to produce a number of films under the Fangoria Films label in the early-90s, including 1992’s Bruce Campbell-starring Mindwarp.