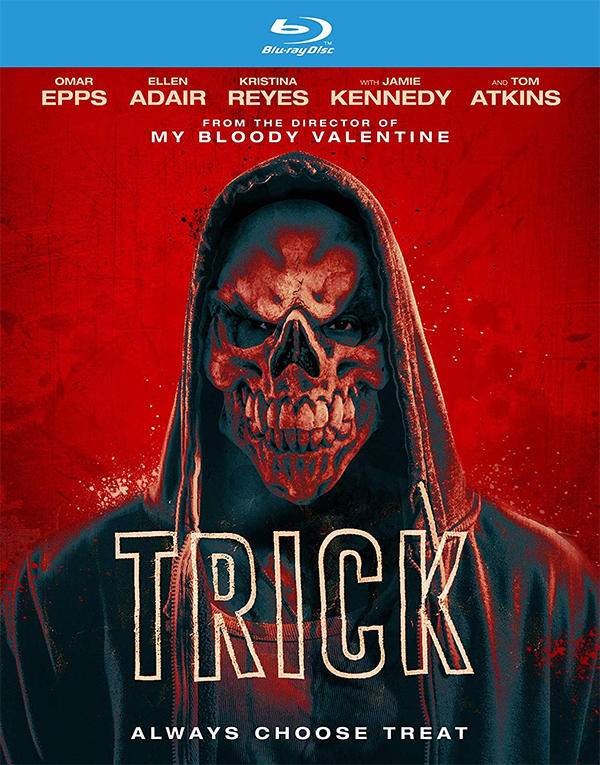 Arriving on DVD and Blu-ray this week is, “Trick”, the latest horror film from writer Todd Farmer and writer/ director Patrick Lussier (“My Bloody Valentine”, “Drive Angry”).  Despite the talent behind the camera and a strong cast that includes Omar Epps, Jamie Kennedy and Tom Atkins, I can’t see this one being an annual Halloween viewing tradition, like this year’s “Haunt”. It’s a shame too because Farmer and Lussier have made an interesting team in the genre. I loved the 2009 remake of “My Bloody Valentine” and same with “Drive Angry”. The pair are much better when working together, then apart (“Jason X”, “Dracula 2000”). Unfortunately, “Trick” lacks the cleverness and fun that their previous efforts provided.

“Trick” opens in 2015 at a Halloween party where a group of teenagers are brutally murdered by one of their classmates, Patrick “Trick” Weaver (Thom Niemann). There are only a few survivors, one being Cheryl (Kristina Reyes), whom might have been the one to temporarily put Trick down. However, the killer doesn’t stay down for long. It takes Detective Mike Denver (Epps) unloading a round of bullets in Trick’s chest and a fall out of a second story window to put him down for good. But is Trick actually, dead?  That is what Mike is wondering when a masked killer reappears the following Halloween. After all, his body was never found.  Now the detective must figure out a way to stop this killer before, he finishes what he started in 2015, which includes killing Cheryl.

“Trick” is a very standard slasher flick that manages to be mildly entertaining, although the kills lack inventiveness. I will say that one kill involving a crane did stand out.  One of the biggest issues I had with the film was the eye-rolling twist in the final act. It didn’t make a whole lot of sense to me. I can’t say that I predicted it, but I didn’t buy it either. That being said. If you are a fan of the slasher sub-genre, “Trick” may be worth a single viewing.