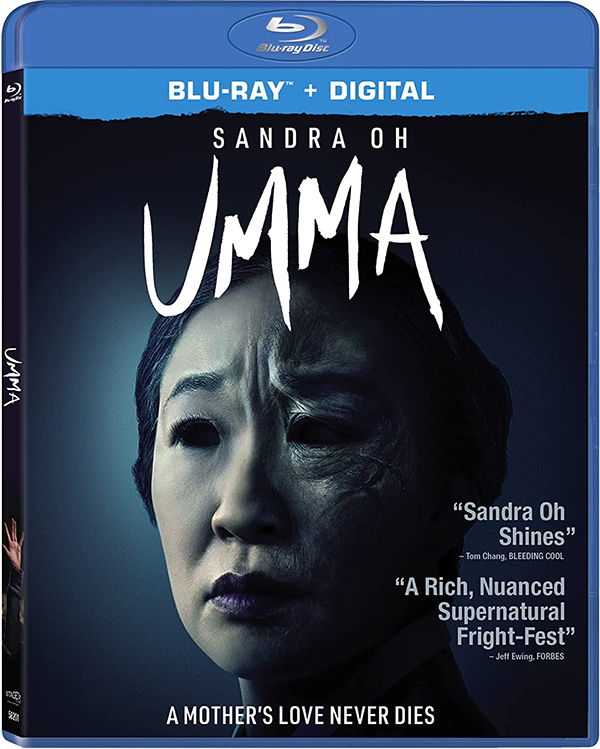 Arriving on Blu-ray this week is the Sam Raimi produced supernatural horror film Umma, starring Sandra Oh, Fivel Stewart and Dermot Mulroney. This film came-and-went quickly when it was released theatrically two months ago. As a horror fan, I try to see almost all of the theatrically released genre films, but I had just not gotten around to checking out Umma. Iris K. Shim makes her feature directorial debut with mixed results.

Set on a farm in rural America, Korean immigrant Amanda (Oh) lives a simple life with her home-schooled daughter Chrissy (Stewart). Together they raise bees and sell honey through a local business, owned by family friend Danny (Mulroney). Amanda and Chrissy do not use any electronic devices, since Amanda claims that they make her physically ill. This mean, no television, computers, cell phones and of course no internet. This of course makes Chrissy feel like an outcast, especially when the local kids talk about her and her mother.

One day Amanda receives a surprise visit from her uncle, who had spent a great deal of time tracking her down. With him, he brings her estranged mother’s cremated ashes who she just learned passed away. Amanda not only cut ties with her mother, but her Korean heritage and her daughter knows nothing about her family history. The little she does know is based on lies.  The reason for this is due to the physical and emotion abuse Amanda received from her mother. This includes using electrical currents to shock her as punishment. That explains the fear of electronic devices. Unfortunately for Amanda, the ashes come along with her mother’s vicious spirit, and it wants to take over her body. For years Amanda had feared becoming her mother, and now her mother might take her over completely.

Umma skates by as a passable horror film in no small part to the performances by Oh and Stewart, who are both very good here. Shim is a capable director who knows how to pace her film. Running at only 83 minutes, Umma breezes along nicely. The problem here is that the filmmaker becomes reliant on jump scares and even those are hit-and-miss. There isn’t much in the way of building tension and paranoia. We know the mother and daughter are struggling, but we never quite feel it. Still, its’ nice to see more representation in films, especially theatrically released ones. While I can’t fully recommend Umma, it is worth checking out if you are a fan of Sandra Oh.