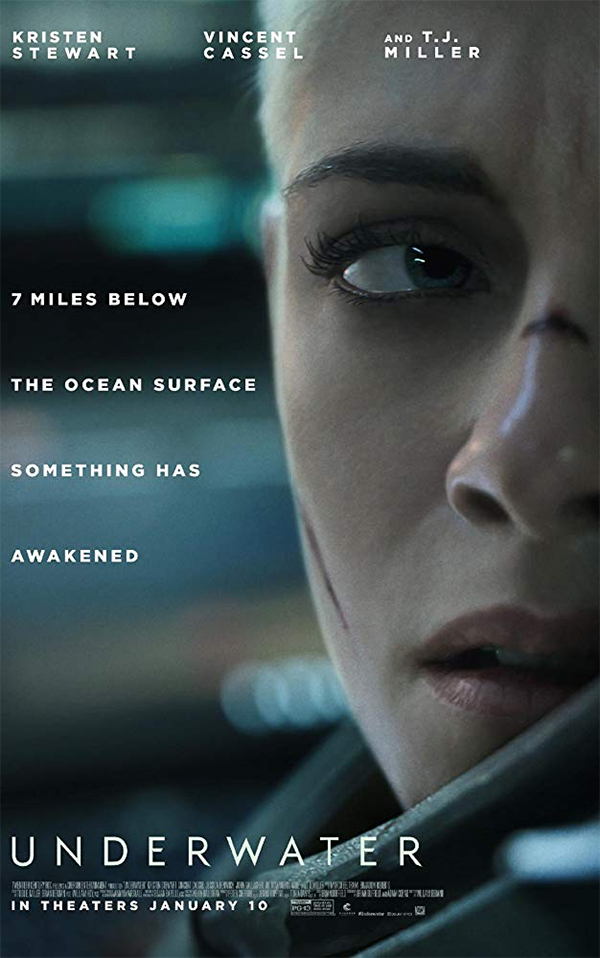 In the 80’s and 90’s we were given some pretty fun underwater “Alien” rip-offs like “Deep Star Six”, “Leviathan” and “Deep Rising”. They weren’t very original, but they were a good time and filled with R-Rated gore. The bottom of the ocean is a scary place (so is the surface of the ocean). It is most likely the scariest place on the Earth to set a horror film.

William Eubank’s directorial follow-up to 2014’s “The Signal”, has quite a bit going for it. “Underwater” has a solid cast which includes Kristen Stewart, Jessica Henwick, Vincent Cassel, John Gallagher Jr. and T.J. Miller (delivering the comic relief). There is some good tension and action which kicks-off almost immediately. There is also the effective subterranean laboratory setting, that has been badly damaged due to an earthquake. However, once the location shifts from inside the lab to the ocean floor, where our aquatic researchers must survive deadly sea creatures, things get much less interesting.

The reason I mentioned the similar films from earlier decades is because they mostly took place within the underwater facilities. Once the action ventures out into the ocean, the picture becomes extremely murky which makes it harder to make out what is happening.  This is one of the biggest issues with “Underwater”.  Everything looks the same and it’s even harder to tell which character is which in those bulky suits. The creatures themselves are even less impressive. I am sure keeping them hard-to-see, helped keep the budget down.

Thankfully, Eubank is able to keep the story moving along at a nice pace. The screenplay was worked on by Brian Duffield (“The Babysitter”) and Adam Cozad (“The Legend of Tarzan”), with some of the best line’s going to T.J. Miller.  Stewart does a really good job as Norah, and proves once again that she can handle action. I thought she was also quite good in last year’s “Charlie’s Angels”

For the most part, “Underwater” is fine. It is a whole lot better than last week’s “The Grudge” and it is far more entertaining than the genre flicks we usually get in January. I do wish the film was a bit more graphic though, aside from one great character imploding moment early on. Despite my issues, I do think fans of deep-sea terror will find plenty of entertainment here.