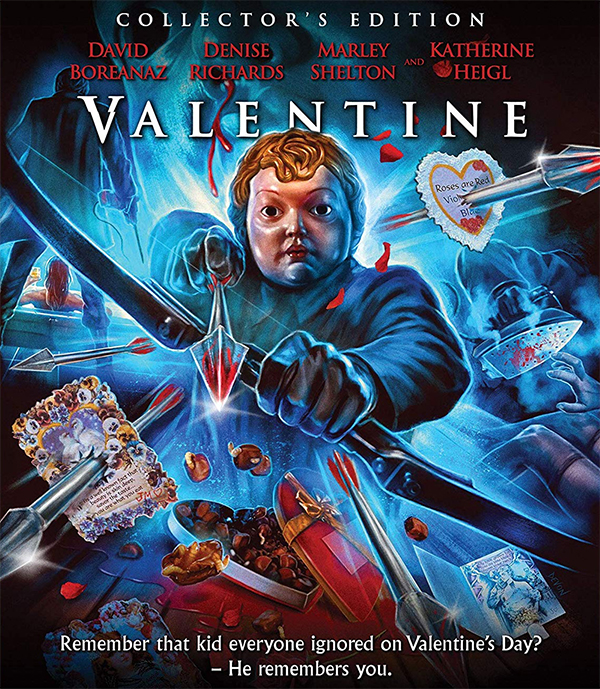 When Wes Craven’s “Scream” revived horror in a big way bavk in 1996, numerous studios tried duplicate that film’s success. Aside from “I Know What Your Did Last Summer”, there was “Urban Legend”, “Final Destination” and even “Halloween: H20”. Finally, there was 2001’s “Valentine” (which was helmed by “Urban Legend” director, Jamie Blanks). If you are a fan of the film, last week Scream Factory released a new Collector’s Edition Blu-ray.

Out of all the “Scream” copycats, “Valentine” is definitely my least favorite. That doesn’t mean I don’t like the film. For a slasher, this one still manages to be entertaining. It just lacks actual scares.  What makes “Valentine” work mostly is the cast. Sure, they are all pretty people, but there is some talent in there too. Marley Shelton makes for a great final girl. She is strong but she also makes us care about Kate. Denise Richards is also perfect in her role as the confident Paige, though I can’t say that David Boreanaz impressed me as Kate’s boyfriend, Adam. The rest of the cast is above average for the quality of the material.

If you are looking to own “Valentine”, you should find nothing to complain about here. Not only do you get a new 2K scan of the film, but there are also quite a few new interviews, plus nearly 2 hours of never-before-released behind the scenes footage.  This may not be the most memorable of horror films from the time, but if you dig it, I recommend picking up a copy.