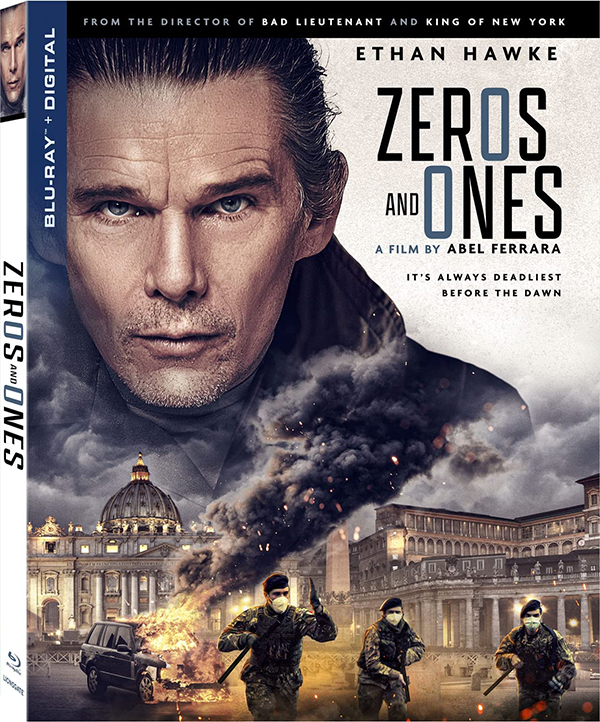 Earlier in his career, filmmaker Abel Ferrara was able to deliver compelling features like King of New York, Bad Lieutenant and even the hugely underrated 1993 Body Snatchers remake, a film that I feel it better than the original and it’s 70’s remake. While Ferrara is spent most of the last decade working on documentaries, he returns to thriller mode with the Ethan Hawke led, Zeros and Ones, which will be loved by some, but hated by others. Sadly, I fall into the latter.

Set over the course of one night in Rome, an American soldier named J.J. (Hawke) is called in to prevent an imminent terrorist bombing of the Vatican. J.J. also seeks out to find any information he can on his captured twin brother, Justin (played by Hawke as well). Justin has information that could possibly prevent the attack but J.J. unfortunately does not have time on his side.

While Zeros and Ones has a 86-minute runtime, it does not feel that way at all. Most of the film, has J.J. walking through dark alleyways and streets with hardly a soul in sight. He does surveillance, watches video footage, and has a few interactions. This is a relatively quiet movie as well. For a thriller though, Ferrara isn’t able to deliver any thrills. Hawke is fine here, but isn’t doing much more than looking focused and serious. Much of the time I had trouble figuring out what was going on. It could have been that I was so incredibly bored that I just wasn’t able to focus on the story that was being told.

As I mentioned before, there will be those who will get more out of Zeros and Ones than I did, but I just can’t recommend this one.