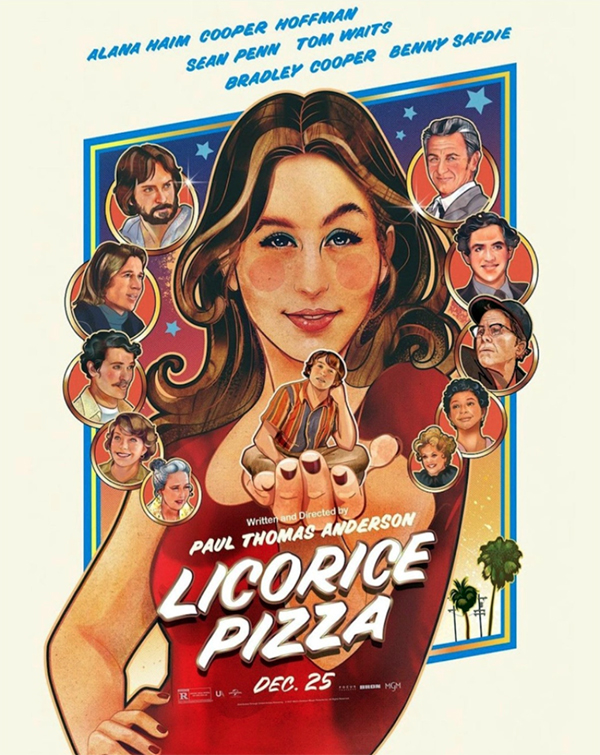 Writer/director Paul Thomas Anderson has had a very interesting film career over the past 25 years. Anyone familiar with his filmography, will undoubtably have their favorites. For me, 1997’s Boogie Nights is my top pick, with 1999’s Magnolia coming in second. Anderson’s latest, Licorice Pizza is the closest he has come to his earlier works. While there is so much to admire about the 70’s set coming-of-age comedy-drama, I didn’t actually love the film. Don’t get me wrong, Anderson, has given us one of the most authentic 70’s set features since Boogie Nights and Dazed and Confused and I felt like I was transported back to another time for 133 minutes.

First off, I should mention that the film has absolutely nothing to do with Licorice or Pizza. The title was actually inspired by a Southern California record store chain of the same name that was actually bought out in the mid-80’s. The store does not even play a role in the film. Still, for some odd reason, Licorice Pizza just feels right.

Set in the San Fernando Valley in 1973 (the year I was born). The story centers on 14-year-old Gary Valentine (Cooper Hoffman), a child actor who develops and instant crush on 25-year-old photographer’s assistant, Alana Kane (Alana Haim). The two met during school yearbook photo day. While Alana has no desire to date a teenager, she does agree to chaperone him to New York, where Gary will appear on a variety show. The two form an odd friendship from there.

With Gary aging out of acting roles, since he is not the same cute little kid he was, the young entrepreneur winds up opening up his own waterbed store. Alana, as-well-as all of Gary’s friends wind up working with him. One of their customers is Jon Peters (Bradly Cooper), a movie producer who also happens to be dating Barbara Streisand. The character was based on the real-life producer who was behind Cooper’s A Star is Born. I really enjoyed Cooper’s darkly humorous performance. However, some of the least interesting moments for me in Licorice Pizza were those featuring Sean Penn as real-life actor Jack Holden, who takes an interest in Alana.

The center of Licorice Pizza is the relationship between Gary and Alana and while both first-time actors are great in their roles, I didn’t quite buy their interest in each other. They never seem like a good fit, even as friends. There is a lot going on in the narrative. We have the oil crisis and its’ effect on everything, including Gary’s waterbed business. There is Alana’s move towards working in politics and more. The film also feels like it goes on for about 20 minutes too long. While I couldn’t get into Anderson’s main-focus, I still loved the world around the central characters and that is enough for me to recommend seeing this one theatrically. It is without-question worth the experience.