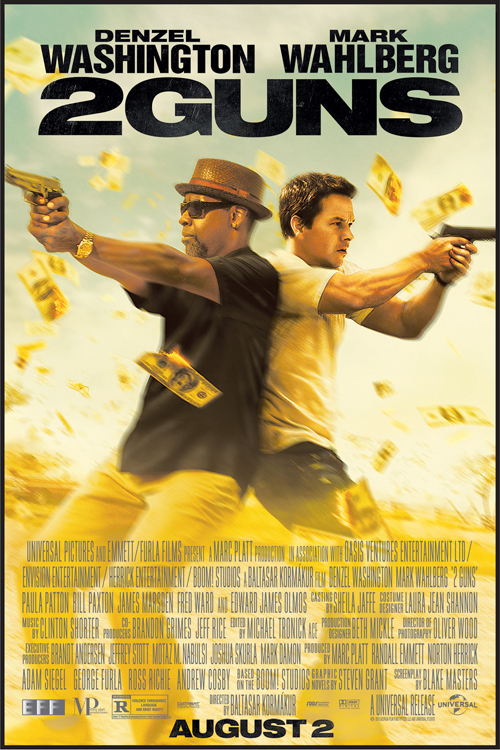 The new Denzel Washington and Mark Wahlberg action feature “2 Guns” is so mediocre and unimaginative, that if it wasn’t for the likability of its’ two stars, I would have completely forgotten everything that happened on screen the moment it ended.  The whole movie just feels completely lazy.

Robert “Bobby” Trench  (Washington) is an undercover DEA agent who is using Michael “Stig” Stigman (Wahlberg) to help bring down the Mexican drug cartel, headed by Papi Greco (Edward James Olmos).  Stig has no idea that Bobby is DEA, and Bobby has no idea that Stig is actually undercover as well for the United States Navy.  When the two finally realize the identity of each other, they are both wanted by not only the cartel and a group of Navy officers led by Quince (James Marsden), but also by the CIA.  You see, Bobby and Stig robbed a local bank in order to get the cartel’s money, but instead they got the CIA’s money and a whole lot more than they bargained for.

Washington and Whalberg have great chemistry and they are both fun to watch, Whalberg is especially funny.  I just wish they were given better material to work with, especially for a film based on a graphic novel that people love.  Even the action sequences lack any kind of thrills.  “2 Guns” is the type of film that may be ok as something to watch on Netflix but it sure isn’t worth your $10 for a ticket.